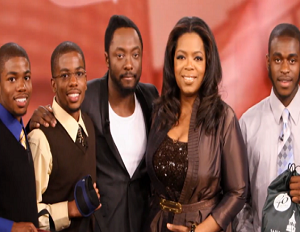 In 2009, the story of four graduating seniors and their desire to attend college got into the hands of media mogul Oprah Winfrey, who invited the boys to fly from Delaware to Chicago to share their education journey on her show.

Jaiquann, Elijah, Barien and Darien were all accepted into their dream universities, but were fearful of not being able to attend due to finances. The ambitious young men were star athletes and top students who also provided a great deal of support at home, and it was their stories about hard work and determination that caught Winfrey’s attention.

“I live with my grandmother, my mom and my sister,” Elijah told Oprah in 2009. “I grew up being the only man of the house.

“He works till five in the morning to help support his family, and then wakes up two hours later just to come to school, and then go to track practice and do it all over again,” said Jaiquann.

Twin brothers Darien and Barien dealt with the issue of having an incarcerated father, whose mistakes they’ve used to motivate them to succeed.

“Well, I’ve tried to learn from my dad’s negative decisions, and it has influenced me to strive in school, and to get good grades,” said Barien.

In 2009, as guests on the Oprah Winfrey show, the young men met entertainer will.i.am who awarded each of the boys the first ever i.am scholarships, that covered each of the scholars tuition, books and fees for four years.

“I wanted to meet you guys because I want to invest in America’s future and I want to send you guys to college,” will.i.am told the young men.

Now, five years later, in an episode of “Oprah: Where Are They Now?” Winfrey followed up with the young scholars to see how will.i.am’s scholarship has affected their academic success.

Barien is now in his second year of pharmacy school with plans to graduate in 2016, while his twin brother Darien is a student at Morgan State University with plans to graduate next year with a degree in industrial engineering. Elijah, who grew being the only man in his house, graduated from Indiana University in Pennsylvania in May and wants to get into the architectural field. While his friend Jaiquann has earned an education degree from Cabrini College and is now working as a teacher.

“For will.i.am to give us this opportunity to go to college and get a quality education is something that I’ll remain grateful for the rest of my life,” says Darien.

Now, with academic success under their belt, all four of the young men have made it their mission to pay it forward and give back as they travel to elementary, middle and high schools encouraging young students to maintain good grades and follow their goals in life.

RELATED: Check the video below as each young man shares college success stories on OWN

Back-to-School: Tips for Moving Into Your First College Apartment