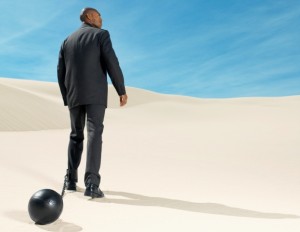 Part of the reason is raw size. There are more than 75 million baby boomers in the U.S., according to Census data, and even more Millennials. The Census Bureau expects Gen X to peak at 65.8 million in 2018.

Unfortunately, one area where Gen X leads the generational pack is debt levels. Data by Pew Research finds that about 75% of Gen have higher family incomes than their parents did at the same ages, but only about 30% have higher wealth.

This is due in part to the fact that the average Gen Xer has 6 times more debt than their parents did and lost nearly half of their wealth between 2007 and 2010 due to the ‘housing bubble burst.’

Add to that high student loan debt, and it’s no surprise that Pew also found that members of the often called “MTV Generationâ€ are less optimistic about their ability to save for retirement that other groups. 53% said they are either “not tooâ€ or “not at allâ€ confident that their income and assets will last through retirement. In contrast, 34% of baby boomers express similar concerns, and 27% of the Millennials surveyed.

“What I’m finding in my clients, is that they are really thinking outside of the box when it comes to things like saving for their own retirement and paying for their kid’s education,â€ says ShirleyAnn Robertson, a financial professional based in Schaumburg, IL with Prudential Advisors. “They’re also doing the balancing act between being parents and having aging parents,â€ she adds.

Financial experts caution that considering longer lifespans and the economic challenges Gen Xers faced during their financial coming of age, retirement saving has to be the priority, even when it comes to things like education costs for their children.

“Retirement savings must take priority,” says Greg McBride, chief financial analyst at Bankrate.com. “Balancing debt and retirement savings is not an either-or proposition. You can — and should — pursue both at the same time. But retirement savings should be the higher priority, especially relative to low cost, often tax deductible debt such as mortgages and federal student loansâ€ he adds.