What Are Your Odds of Finding a Nursing Job in Maine? 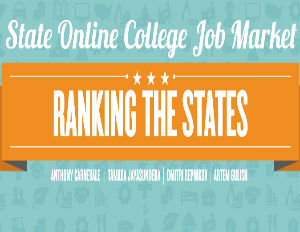 A recently released report, State Online College Job Market: Ranking the States, ranks employers by their largest recruiting presence online in all 50 states. This report is important for BE Smart readers because the jobs represented are for candidates that have at least a bachelor’s degree.

Released by the Center on Education and the Workforce at Georgetown University, the report ranks the states by job openings per college-educated worker. It also examines how competitive a particular state is, and whether industries are growing in a state or in decline.

For example, according to the report, college graduates seeking work in STEM fields have the best odds in Delaware, Massachusetts, and New York.

3. Alaska, Montana, and New Mexico are the best labor markets for healthcare professional and technical jobs, while Wisconsin, New Jersey, and Louisiana are the least favorable.

The data in the report examined only online ads posted by employers, which, it says, now advertise more than 60% of all job openings online. However, it does not include data from generic online job market portals such as Indeed.com or Idealist.com, nor did it examine jobs advertised on Twitter or LinkedIn. Anthony Carnevale, lead author of the report and director and research professor of the Georgetown University Center on Education and the Workforce, explained that those entities don’t allow anyone to look under the hood at their data. He also questioned if such portals have the capacity to eliminate duplicates. “If you find 50 nursing jobs in one community, is it 50, or is it really 10 that you’ve found five different ways? What we have is a snapshot of jobs for people with a B.A. or better over several months showing distribution by state–no one has done this before.â€ Using the report, Carnevale said, “If you’re a nurse in northern Maine and you’re looking for a job, you can look in Florida and California too.â€

The report provides not just information about job availability, but also labor market competitiveness within each state. On average, college grads have the best odds of finding a job in Massachusetts, Delaware, and Washington State; odds are worse in West Virginia, Rhode Island, and South Carolina.

To view the report, go to https://cew.georgetown.edu/wp-content/uploads/OCLMStates_FullReport_2.pdf.