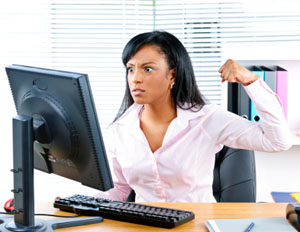 We all love social media. It has become as much a part of daily life as bathing or brushing our teeth.

I’m a big Twitter fanatic and find it to be the best platform to connect with readers, share content and promote positivity for professionals getting through their work day. It’s quick, short and concise, three perks that make it an easy-to-incorporate tool of communication in my often busy schedule.

I read the tweets, I follow the tweets—for some I smile, others I grimace.

The top tweets that are guaranteed side-eye worthy are those that do the most—those updates that reach the pinnacle of TMI. Some of us are using social media in ways that are a bit too transparent and could, quite frankly, lead to more losses than wins.

One highly publicized case of when social media transparency goes wrong is that of artist 2Chainz, who reportedly posted a Vine video smoking a blunt in a room littered with what looks like a cough syrup bottle and cups— all a day before being released from jail after an arrest for narcotics possession. Anyone familiar with 2Chainz’s brand knows that those elements are part of some of his lyrics, however, what future business opportunities —or physical freedom—might he lose after all is said and done?

(Now, wait. I don’t want to sound like that wack elder who hates anything hip-hop or youth-related. I’m not afraid to admit that a 2Chainz track or two has been in the playlist rotation during editing or workout sessions.)

But artist 2Chainz aside, the social media TMI—and apparent lack of consideration for what’s being instantly released to world via the “Share” button—is becoming a bit too common, especially among young professionals. I see it all the time:

Tweets about how someone hates their smelly cubicle-mate or wants to punch their boss.

Tweets about using office equipment to print fliers, download music or movies, fix resumes or take care of the side hustle.

Ratchet tweets of sexual nature or retweets that are disrespectful, crass or fall under the category of bullying.

Even pictures and videos are shared where it’s clear the person didn’t tidy up first or apparently forgot about the illegal or suspect background elements being photographed or filmed.

Some may see these things as harmless, but when it’s time to get a job, new client, or promotion, the damage is already done. The average person is not privy to the luxuries celebrities are accustomed to— a PR team to put out fires or high-powered lawyers to handle sticky legal situations— therefore the fallout can be even more detrimental.

Do they not realize that companies have technological savvy to track Web activity and investigate?

Do they not realize they’re diminishing their professional brands now that everyone in the world knows their house is a mess, they spent their night drinking to oblivion or they had a fight with their boyfriend’s side chick?

Who wants to hire someone who discloses such things publicly and thinks it’s okay to do so?

I don’t know of one Fortune 500 CEO or recruiter—or even a savvy entrepreneur with a promising startup— who would love to have such an employee at their company.

We all have our private lives outside of work, and as long as it’s legal, you can spend your time the way you please, but that doesn’t mean those experiences should be made public. I was once one who thought, ‘I shouldn’t have to censor myself. I’ll post what I please, and whoever doesn’t like it, oh well.’ Then maturity stepped in. I found there are bigger wins by being strategic and keeping some things private than being a rebel without a cause.

If you’re really serious about advancing in your career—and your life— you might want to be sure that what you’re sharing with the world will help in your plight to be better, live better and do better.

Ask yourself, four key questions when you share things on social media:

1. Who’s likely to see this?
2. What is the fallout if anyone sees it?
3. Is this update or post worth the reaction or fallout upon posting?
4. Do I have an appropriate response ready for things that may be questionable or criticized?

When you get the urge to tweet or update with something not-so-savory, tweet a pic of your diploma, your first $10,000-profit check or your next big idea. Tread lightly on disclosing too much information, whether it’s out of emotion or rebellion. Stop it with the social media TMI and get to more boss moves.

Do you think millennials are sharing too much information via social media? #SoundOff and follow Janell on Twitter @JPHazelwood.

Judge: Movie Studio Interns Should Have Been Paid