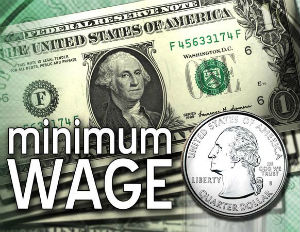 A nationwide survey conducted by Harris Poll on behalf of CareerBuilder revealed that 62% of employers and 58% of company senior leaders want to see minimum wage increase in their state. Although the majority of employers stated that only 7% believe $15 to be fair, 9% don’t believe there should be a minimum, and 48% think the answer is somewhere between $10 and $14 an hour. The sample survey group consisted of 2,188 full-time hiring and human resources managers and 3,372 full-time employees in the private sector.

A majority of employers — 55% — believe that $10 an hour is a fair minimum wage. However, 53% of employers state that higher minimum wages would increase consumer spending. All major industries showed that they would support a minimum wage hike: 68% in retail, 67% in information technology, 65% in healthcare, 60% in leisure and hospitality, 59% in professional and business services, 54% in financial services, and 52% in manufacturing all favored the increase.

A large majority of employers — 74% — believe that a minimum wage increase could provide a higher standard of living for employees: 58% of employers stated that it would also have a positive effect on employee retention, and 55% said it could benefit the economy. However, other employers think that increasing the minimum wage would affect their business negatively: 66% say it would cause employers to hire fewer workers, and 65% state that it would hurtÂ small businessesÂ that are already struggling.

Present Like a Pro: 3 Tips for Mastering Professional Presentations