5 Scandalous Traits to Win in the Office 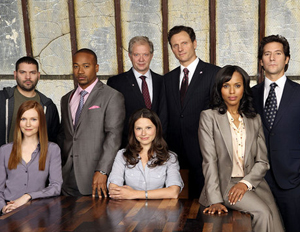 Every Thursday, millions of viewers (myself included), engulf themselves in powerhouse drama series Scandal, as Olivia Pope and associates tackle crisis after crisis. As we anticipate the next must-watch episode (Are Liv and her ex-fiancÃ© back together now? What’s going to happen at the President’s birthday?), let’s take a look at qualities each character embodies that could help young professionals succeed in their own careers:

Olivia Pope: Strong discernment. It’s no secret that Olivia’s key to conquering seemingly impossible controversies lies in trusting her gut. According to new research published in the Journal of Consumer Research, people who trust their emotions are more likely to correctly predict the outcomes of events. If your job requires you to make important decisions, while it’s imperative to gather cold, hard data, it’s also just as important to trust in your gut.

Harrison Wright: Direct disposition. The smooth-talking, yet straight-forward Harrison Wright takes the role of the gladiator lawyer thinking quickly on his feet and isn’t afraid to tell it like it is. In the workplace, it’s important to keep an open and honest dialogue that is direct and clear with your supervisor as well as coworkers, especially if you want to be seen as a leader.

Abby Whelan: Fearlessness. Whether it’s breaking into a suspect’s house or having to retrieve a cell phone from the pocket of a dead reporter, Abby Whelan is not afraid to get the job done. While climbing the first steps of the corporate ladder can be intimidating, taking on challenges will build your confidence to help you succeed. And being that person who’s willing to go above and beyond makes you that much more marketable in the long run.

Quinn Perkins: Master multitasking. The innocent—or not so innocent—Quinn Perkins is relentlessly eager to assist her team members even when she is the middle of an investigation herself. Your willingness to learn and help others will make you an ally in the office to power players and will put you at top-of-mind for major boss moves.

Huck: Trustworthiness. Huck’s loyalty and knowledge makes him Olivia’s go-to guy when things get tough. Most employers seek professionals who will stay dedicated to the company’s mission and priorities, even during trying times. Loyalty and trust are key assets to have when it’s time to advance in your career, as others in your company and/or industry are likely to return the favor.