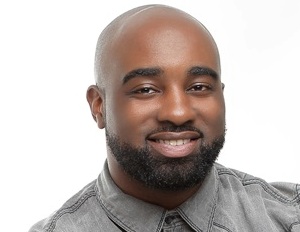 People are always in need of advice, inspiration, and motivation. We may see and know the answer that we seek, but it’s often more convincing when it’s heard, read and/or seen elsewhere or coming from someone else, specifically, from someone who has walked the path we may seek.

This makes it easier to gain an audience for someone like Rob Hill Sr. Not saying that it’s easy to gain ears or that people will easily follow, it’s just that people tend to gravitate toward someone who can speak from experience and spread wisdom in a way that makes a a goal seem achievable.

BlackEnterprise.com spoke to Hill about the path he has taken to get to where he is today and the path he intends to take to continue motivating others to create their own paths.

BlackEnterprise.com: It seems as if people see your motivational words being retweeted and shared everywhere these days, how did you amass such a following?

Rob Hill Sr.: I wanted to tell my truth in a way people could relate to. That’s been my goal the whole time. I wanted people to see a piece of themselves in my word, I knew that if I could do that effectively things would grow, and they did.

What set you on this path of motivating people?

I got it wrong a lot in life and I developed a lot of tools I felt other people could use. My plan wasn’t necessarily to motivate people; I just wanted to be a positive influence in the lives of those closest to me. When they had a bad day or a rough situation I wanted to be the person they called to make sense of it all. I wanted to be the one who helped them find purpose in their pain. Serving them in that manner led me to my purpose.

You’ve gone on tour previously with your “Living Life For A Living” and was successful and now you are embarking on your next tour titled, “I Want You To Be Good.” What are your tours about and how do you put together the agenda for them and how do you target people to come experience the tour?

Any tour for me at the foundation is about us as a people getting better, in all aspects of life. Living Life For A Living was targeting the dreamers and people who wanted to live with a little more flexibility. It was designed to be the refresh button, to wake people up and make them feel like having the desires of their heart were realistic! I Want You To Be Good is building on that but it’s more of the emotional side of life starting with our relationship with ourselves. With every tour, I start with the bottom line question: “What do I want people to walk away from this with?â€ And I build from there. I tailor my daily messages to align with the mission of the tour, and once announced, the event typically sells itself. I want to attract those actively seeking change, not those passively wishing it happens someday.

You were once homeless and the way your life was going, you were heading toward a path that no one wants to take. What made you decide to turn your life around and how did you come to realize what would become your life’s calling?

My best friend was in a fatal car accident when I was 18. Before he passed, we had a conversation about life and who we wanted to be down the road. I was bouncing from place to place, living life with little regard for anyone but myself and he told me I was the type of person that made people want to be great. I don’t know what made him say it, but it woke up something within me and when he died just a few weeks later, I promised I would live a life that brought honor to his and everybody else I was connected to. Losing him and becoming a young father really shook my world up. I started wanting to bring the greatness out of everybody I came in contact with.

You’ve written several books and audiotapes, you even have a mixtape. What’s next on the written/spoken word front?

Black Directors: Be Prepared To Walk In Harmâ€™s Way

Woman Fired From Job for Not Being “Black Enough” Wins Lawsuit