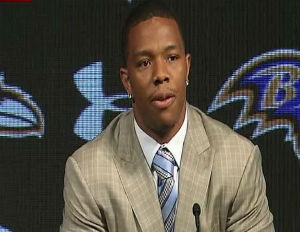 Earlier today it was reported that the domestic violence charge against former Baltimore Raven running back,Â Ray Rice, have been dismissed. A tweet from ABCNews.com Aaron Katersky confirmed the report –

Per ESPN – ‘He was required to attend the pretrial intervention program for the minimum of one year, with the third-degree charge of aggravated assault set to be dismissed upon his successful completion of it. Under terms of the program, Rice paid $125 in fines and received anger management counseling. The arrest will remain on Rice’s record, but there will be no conviction.

The 28-year-old Pro Bowl player and Super Bowl champion has not played since the incident between he and his wife, Janay, occurred last February. Originally suspended for two games, Rice was suspended indefinitely by NFL Commissioner Roger Goodell, after video footage of the events in the elevator surfaced. The following December, Rice was reinstated into the NFL after a neutral arbitrator overturned his suspension. In March, Rice was awarded $1.588 million dollars following a court settlement in a wrongful termination lawsuit against his former employer.

According to ESPN, Rice has repeatedly apologized for his actions. He has been free to sign with a team since his reinstatement but so far has received no interest.

Public reaction via social media has been mixed, but as the NFL prepares for training camp and the 2015 season, Rice could land on a team following the dismissal of his charges.