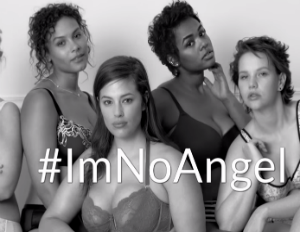 One word, “sexyâ€, a theme heard loud and clear in the opening of new Lane Bryant “Cacique” lingerie promo, and there’s no doubt, Lane Bryant is striving to redefine “sexyâ€ with their recently launched, “I’m No Angelâ€ underwear campaign.

[Related: New Study Shows Handsome Men May be at a Disadvantage When it Comes to Hiring]

The promotional video, for the plus size clothing company, features beautiful plus size models of diverse ethnic backgrounds and body types. The promo asks the audience to consider, “How boring would it be, if we were all the same?â€

The #ImNoAngel campaign’s effort to appear “different” from other popular images projected by the fashion industry, was seen as a direct jab at mainstream lingerie empire Victory Secret’s . It wasÂ reported, last fall, Victoria’s Secret came under scrutiny for an advertisement that used the slogan “The Perfect Body,â€ and featured a group of predominantly white, very slender models.

After receiving criticism on social media, the lingerie company pulled the “Perfect bodyâ€ slogan and replaced it with “A body for every body.â€ However, the appearance of the models in the campaign remained the same as it was previously— majority white, and all skinny.

Each model in the Lane Bryant ad promo promotes a unique and diverse body type. Fans have the opportunity to better acquaint himself with the models, through Â personal bio portals featured on the Lane Bryant website, that are unlocked periodically throughout the campaign.

The hashtag #ImNoAngel was mentioned 24,219 times on Instagram since the launch of the campaign. Lane Bryant CEO Linda Heasley told MSNBC, “We lead with fashion not size and we want everyone to celebrate who they are.â€

The “I’m No Angelâ€ mantra reminds viewers, Lane Bryant customers, and even the fashion industry, there’s more to beauty than size. It encourages body diversity, self love and confidence portrayed through the power of the almighty selfie. Thats right, anyone, anywhere, anytime can join the movement by sharing their personal, empowering, redefining sexy moment via Instagram or Twitter using the hashtag Â #ImNoAngel.

To find out more about the “I’m No Angelâ€ campaign visit Lane Bryant.