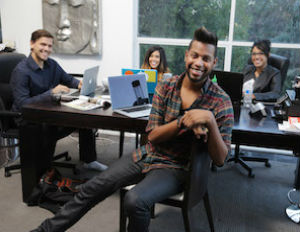 UberFacts founder Kris Sanchez signed up for Twitter in late 2009 and, even if you asked him nearly two years later, he wouldn’t have predicted posting 140-character messages would lead to a $500,000-plus-a-year company.

“I liked finding random info (and) sharing it with people,â€ 23-year-old Sanchez says of his early Twitter days and his growing empire, which now also includes a Facebook profile, Instagram account and the occasional Vine video. Facts are tailored for each medium (think limited space on Twitter, the need for a picture on Instagram, etc.), and are sourced from new scientific studies, Digg and Reddit posts, and even books and magazines, with Sanchez admitting to spending more than $200 on fact-filled books from Barnes & Noble.

“I wanted to be able to share what I learned with a large amount of people … I originally wanted 200,000 followers on the page,â€ he says.

But to get social media users to start grasping onto that content, he first had to get the word out about the thought-provoking facts he presents on the UberFacts Twitter feed. To start, he took $1,000 of his own money and invested it in advertising on Twitter, and soon after, the numbers started to grow.

“When I started posting 24 hours, I saw numbers double, (so I) knew I had to post all the time,â€ he says laughing. Indeed, posts can go up as many as four times an hour on Twitter and he’s had to hire a full-timer to help create facts and a part-timer to help produce the videos.

But it’s a method that has paid off. UberFacts has has amassed 10.7 million followers on Twitter, 1.6 million Facebook likes, 624,000 followers on Instagram and nearly 450,000 subscribed to UberFacts’ Vine profile.

Sanchez adds that about 50% of the followers on UberFacts’ Twitter account are from U.S. and another 45% are from the UK. On Facebook, the devoted followers are a mix of citizens from the U.S., UK, the Philippines and Pakistan. The success has allowed Sanchez the freedom to pursue his interest in dance as well as embrace his hobby.

And the company continues to expand. UberFacts recently filmed a man-on-the-street video in Los Angeles that will soon debut on Facebook. “I thought it would be a good idea to get on the street and see how these facts relate to people’s everyday lives and it was a chance (for them) to voice their opinion on them,â€ he says.

There are also plans for a book and a TV show, the details of which remain hush-hush as development continues. “We kind of want to do something that hasn’t been seen before,â€ he says about the forthcoming show.

Sanchez can also boast at being the lone Twitter account followed on by the nearly 11 million-strong UberFacts Twitter feed, despite not being “the face of it.â€

Sanchez, who exited college about a year prior to launching UberFacts, has avoided falling prey to some of social media’s many temptations and demonstrates how some millennials have been able to monetize the mediums. And he well-surpassed his goal of having 200,000 followers.

“My goal was to just have good content and get that following,â€ he says.