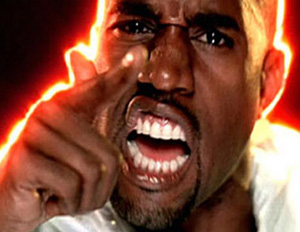 Kanye West has an interesting knack with words. He also has a unique way of unnerving people with those words. Whether you are a fan of his music or not, you must admit that his rants— as they have become so infamously dubbed—are quite entertaining to say the very least.

I may be in the minority when I say I find Mr. West’s super-charged outbursts unusually inspiring, so I was actually disappointed when I heard he was going to make a concerted effort to do less ranting in 2014. Navigating your career at times can feel daunting, frustrating, and taxing, and no one is immune, not even the multi-millionaire superstar.

I completely empathize with the super producer/creative mastermind, finding inspiration on leadership and career development within the madness. Here are five such instances I’ve drawn from in my own professional pursuits:

1. Constant evolution and change is good. After conquering the music industry, the Chicago-born rapper has been extremely outspoken about the challenges he’s faced breaking into the high-end fashion world. Prior to, he spent many years in the background, producing and convincing the music industry of his rapping capabilities before becoming the hip-hop rockstar he is today. In today’s job market, 10 years may be too long of a long stretch, but the point is you should Â get in the habit of evolving or gaining new skills periodically or risk getting left behind.

2. Don’t be afraid to build your own career box. Along with point No. 1, don’t allow yourself to be limited by anyone’s labels or categories. If you have aspirations to be in a new industry or to obtain a new role in your company, like the “Bound 2â€ rapper would say, stay focused and keep working toward your goal, no matter who doesn’t believe in your vision.

3. Even the best of the best need mentors. In an interview, West shared he intentionally took to Jay-Z as his mentor because Hov exuded something he himself said he lacks: likability. Find someone who not only has your dream job, but someone who has a particular skill you lack and emulate them.

4. Generational wealth always trumps the quick coin. In the beginning of your career, it is easy to get caught up in earning the biggest paycheck for yourself. However as time goes on and you mature, you realize that your income not only affects you but everyone in your life, like your parents (especially as they age), your children, and of course your significant other. Since becoming a father, West has said he has a new fervor to not only make money but have complete ownership of all his brands so he can have something to share with his daughter North. What streams of income are you creating today that can sustain your loved ones in the future?

5. Know your value, lest you lose your power. West has been very open about severing ties with Nike last year, the same company who manufactured his very coveted Air Yeezy’s. Since then he has signed a new deal with Adidas that will allow for more control over his line. The lesson here is, don’t low ball yourself. If you have a particular skill that has been honed, put a price tag on it. If think you are in line for a raise ask for it, and don’t be afraid to move on from any opportunity that does not pay you what you are worth.

Lenora Houseworth is a social media strategist in New York City. Find her on Twitter and Instagram at @LenoraTheScribe.

Apple Inc. to Pay More Than $32 Million in Refunds

5 Ways to Get App Customers Coming Back