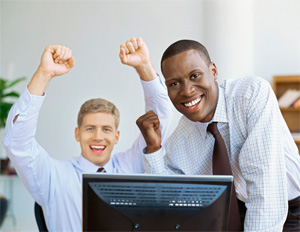 Last year, internships got a bad rap, with the media and public turning a discerning eye to those that are unpaid. Lawsuits and debates on the subject were prevalent, with young professionals questioning the value of offering free labor to get their foot in the door.

However, some companies place high salary stock in their interns in a plight to attract and retain top talent. Job and career site Glassdoor recently ranked 25 highest-paying internship programs for 2014, and companies in the STEM industries are in the lead.

Palantir, a computer software and services company, took the top spot, paying its interns $7,012 per month ($84,000 annually). That’s far more than the average full-time worker’s salary (at $48,000, according to Simply Hired.)

VMWare, a cloud and virtualization software and services firm, was ranked second (paying interns $6,966 a month) and Twitter (TWTR) ranked third, with a $6,791 monthly salary.

Glassdoor spokesman Scott Dobroski told CNN that intern pay has increased between 2% to 5% year-over-year for the majority of companies on the list.

“The fight for the best and brightest young minds is fierce,” he said. “If these great minds go somewhere else, that’s going to hurt them, so they’re willing to pay top dollar.”