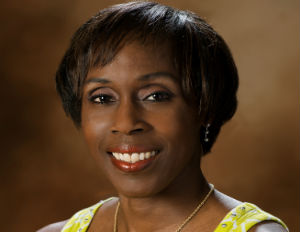 It’s been 15 years since Joetta Clark Diggs competed in her last Olympic game but she is still sprinting. Coming from a family of history-makers, Clark Diggs is the daughter of Joe Clark, one of the most famous high school principals in the country who was the subject of the movie Lean On Me. Her sister Hazel Clark is also an Olympian.

The four-time Olympian represented the U.S. in the 800 and 1,500 meter Olympic games in 1988, 1992, 1996 and lastly in 2000. As the captain of the Women’s USA Team that year, Clark Diggs served her country well but she came in third, giving way to her younger sister Hazel to win the race. At that time a 38 year-old Clark Diggs decided to retire.

“As an athlete I felt I (still) had something to offer. I retired in 2000 and I thought what can I do?,â€ says Clark Diggs reflecting on that period. She says she saw a need long before First Lady Michelle Obama did for young children to be physically active and to eat healthy, so in 2002 she established the Joetta Clark Diggs Sports Foundation to promote involvement in sport for grade school children.

[Related: Tiger and Serena: The Rise and Fall]

“Before the Lets Move campaign and before everyone was talking about obesity, I was ahead of the curve,â€ explains Clark Diggs.

For the last 13 years, her foundation has been providing annual programs to school districts in the runner’s birth state of New Jersey. Â The foundation has served more than 50,000 students and Clark Diggs says they have given away more than $60,000 in scholarships since its inception.

In addition to programming that assists with keeping K-12 grade students healthy and active in sports, the foundation also offers a SISCO program that stands for Students Interested in Sports Career Opportunities.

Clark Diggs says this program is designed for the student who is not an athlete but may want to know how to be a part of the team’s medical staff or get a contract cleaning the stadium.Â  “We introduce students to these careers,â€ says Clark Diggs.

Other programs include the Financial & Fitness Expo, the Head 2 ToeÂ® Fitness program, the Fitness Challenge and Joetta’s Geniuses.

All of the programming is centered around education, youth and sports because these were all ingrained in the University of Tennessee graduate at an early age.

“I started running when I was about seven or eight years old,â€ recalls Clark Diggs. “I used to go to a day camp in the City of Newark back during the ‘67 and ‘68 riot period. Then when I became 10 or 11, I started running in track and then in college and so forth and so on,â€ says Clark Diggs as if this is the normal progression of all pre-teens.

Her father was Joe Clark, known for no nonsense, so it’s no wonder that he raised several disciplined athletes. Before there was Tiger Woods’ father or Serena and Venus Williams’ father, there was Joe Clark.

“My father was the one who got us started,â€ says Clark Diggs referring to herself as well as her Olympian siblings. “We ran distance. Not many kids were running distance. But my father wanted to dispel the misconception that black kids couldn’t run distance.â€

Clark Diggs is still running even off the track, still breaking barriers and receiving honors.

Aetna selected Clark Diggs to serve as one of the healthcare company’s Champion for Change in it’s 2015 African American History Calendar because of her efforts in creating a healthier world through sports.

The wife and mother of a 12 year-old, Clark Diggs recently penned Joetta’s “P” Principles For Success: Life Lessons Learned From Track & Field and doesn’t plan to slow down anytime soon. “Too whom much is given, much is required,â€ says Clark Diggs as to what keeps her going. Â “I have too much to give; too much to share to stop.â€

Watch Joetta Clark in the 2000 Olympics along with sister Hazel Clark below.

Atlanta Ranks No.1 for Income Inequality

Fresh Take: 5 Rappers Interpret Fashion with Their Own Brands