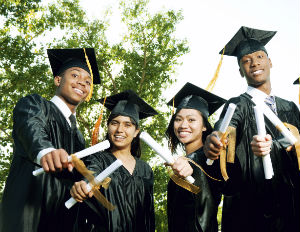 Fact 13. Interventions for older children are not too late–interventions during high school also raise graduation rates.

There is strong evidence that a variety of high schoolâ€‘age interventions, most of them targeting students from low-income and minority backgrounds, have successfully increased high school graduation rates. These aren’t the only effective interventions, but these are the ones that have been rigorously evaluated.

Net costs for each of these interventions are hard to estimate, but are generally thought to be modest. New York’s small schools initiative has been successful in raising graduation rates (9 percentage points) particularly among black males (11 percentage points, or from 31% to 42%), a group that has historically had some of the lowest graduation rates.

The additional cost per student, per year of the small schools initiative was about $850, and falls to nearly zero when accounting for differences in teacher salaries and student populations. Other interventions have focused on improving outcomes within schools, but these tend to be more limited in scope. Double-dose algebra, a program at Chicago Public Schools, requires students whose eighth grade math test scores place them below the national median to enroll in two algebra courses when they begin high school–regular algebra and an algebra support class.

At an estimated cost of less than $1,000 per student, students enrolled in the double-dose classes increased their graduation rates by 2.6 percentage points; however, these effects were only found for the highest-scoring students subject to the intervention, who scored just below the national median. An intensive mentoring program at 11 high schools, most of them urban, has also improved graduation rates among low-performing youth.

An important recent paper documents the impact of court ordered school finance reforms in the 1970s and 1980s on spending and subsequent student outcomes. A 10% increase in per-pupil spending during each year of schooling increases high school graduation rates by 10 percentage points. Although the additional funding was generally unrestricted, the study finds that school spending increases were associated with decreases in student-to-teacher ratios and increased teacher salaries.

Researchers highlight the central challenge facing education reformers: because of their limited scale, modest interventions–such as double-dose algebra–are more straightforward to implement and are easier to rigorously evaluate, but they do not address the underlying challenges facing less-advantaged students.

Large-scale interventions, such as New York’s small schools initiative and some charter school models, may show some success at addressing the underlying challenges but are difficult to successfully replicate in other contexts. Improving the methods of evaluation and designing interventions for replicability are crucial to understanding what additional approaches work for improving high school graduation rates.

Bottom line: Good schools make a difference. Do all you can to get your kids in the best schools possible.