Young Dentist On the Fast Track to Success 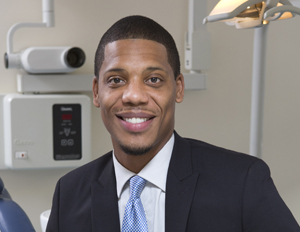 The It Factor: Dr. Kareem Merrick, 30, is the director of the dental department at Harlem United, a community-based organization affiliated with New York’s Columbia University.Â  Continuing in his family’s tradition, Merrick received both his undergraduate and dental degrees from Howard University. Though Merrick is the son of a doctor and a nurse, he initially wanted to pursue a career in government and politics. It wasn’t until he suffered a chipped tooth playing basketball in high school that he fell in love with the art of dentistry and decided to pursue the career professionally.

After graduating from dental school, Merrick completed his residency at Interfaith Medical Center in the heart of one of Brooklyn’s toughest neighborhoods. He endured the grueling hours and intense trauma cases, all in the hopes of becoming a well-rounded professional. “The residency honed my clinical skills and prepared me to do a great deal of surgical procedures,â€ Merrick says.

On the Fast Track: Upon completion of his residency, Merrick began his first full-time job with Harlem United, immersing himself in the work. By working long hours and consulting with patients on his lunch break, he learned as much as he could.Â  Just a year later, Merrick was offered his current position as dental director. Though this position was reserved for someone with much more experience, Merrick’s skill and work ethic coupled with the glowing reviews of patients and staff ultimately resulted in his promotion.

In addition to his role as dental director, Merrick is also an instructor of clinical dental medicine at the Columbia College of Dental Medicine. In this role, he works with general dentistry residents and dental students. He draws on his experiences as a student and a dentist in an effort to create meaningful learning environments. “To be able to teach some of the things I’ve learned, so shortly after I was in their position, has been quite a blessing.â€

Passion for Patient Advocacy: Merrick’s new role encompasses more than just patient care, though that remains his primary passion and focus. He also oversees the dental department’s staff, both in-house and at their mobile dental units. His responsibilities now include budget management, hiring, and administration, and he will also lead the dental department in their expansion by adding additional clinics and mobile units throughout Harlem. “No matter what opportunities present themselves, I can’t see myself straying too far away from patient treatment. That’s where it all started for me.â€

Purposeful Rewards: Dr. Merrick shares that his job is rewarding on so many levels.Â  The ability to establish long-term relationships with patients, educate young dentists, and strengthen communities through dental health are just some of the benefits.

One of his goals is to make dentistry an appealing profession for young people who are trying to choose a career path. “My duty is to take the fear and the evil out of dentistry.â€ For Merrick, dentistry is a significant means to improve people’s lifestyle. “You don’t really realize how important a smile is until something goes wrong. Just about everything starts with a smile.”

‘Soul Man’ Renewed for Another Season