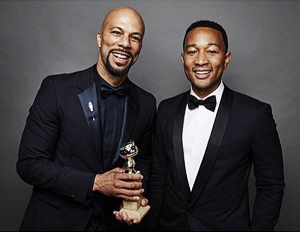 Last night viewers all across the country tuned into ABC network to watch The Oscars. The red carpet was graced with the likes of Oprah, Lupita Nyong’o, Kevin Hart and Idris Elba. All-star actor Neil Patrick Harris hosted the award ceremony and several of music’s brightest stars, including Jennifer Hudson, rendered perfect arrangements.

[Related: This Day In History- Charles Barkley Is Born]

The biggest moment of the night, however, was Common and John Legend’s performance of their original number “Glory” from the Selma soundtrack. The hip-hop and R&B duo dominated the stage, Legend on the piano and Common standing under a replica of Alabama’s Edmund Pettus Bridge. Joining them was a choir dressed in all black, slowly marching and singing “Glory” in pure harmony. The final note was followed by a standing ovation and quite a few teary eyes, including David Oyelowo who took on Martin Luther King, Jr. in the film.

Following the highly emotional performance, the pair won the Academy Award for Original Song. The acceptance speech left an equally moving impression, as Common expressed, “The spirit of this bridge connects the kid from the South Side of Chicago, dreaming of a better life, to those in France standing up for their freedom of expression, to those in Hong Kong, protesting for democracy.” John Legend took the moment to shed light on political injustices: “We know that the Voting Rights Act that they fought for 50 years ago is being compromised right now in this country today. We know that right now, the struggle for freedom and justice is real. We live in the most incarcerated country in the world. There are more black men under correctional control today then were under slavery in 1850.”

Robin Roberts greeted Common and John Legend after the performance and win. Common told the reporter, “I felt like we were paying honor to Dr. King and all these people that fought for us and stood up for us. I felt like they were coming through the music.” Legend added that he felt “lifted” while singing.

Catch the epic performance below.