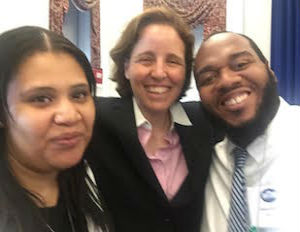 Software developers Jamal and Felicia O’Garro started Code Crew in January 2013. But it was only a few years earlier that the married couple got into coding.

[Related: Google to Spend $150 Million on Diversity Initiatives in 2015]

“We both decided to teach ourselves to code after being laid off during the financial crisis,â€ Felicia says, noting that both worked in the financial industry. “We thought it would be cool if we could learn, but also have the opportunity to learn with other people, so that’s why we started Code Crew–and it just started growing extremely fast.â€

Indeed, what initially started as a meetup group in New York City grew to include dozens of wannabe coders eager to learn some of the hottest skills needed to succeed in the world of tech. And with classes spent working on specific projects, learners occasionally become the teachers to their classmates by collaborating and, indirectly, boosting their confidence.

“A lot of people want to get started with coding, but they don’t know where to start, so we have a lot of intro classes that are pretty attractive to them,â€ Jamal says. “[It’s] a lot of people looking to change careers, there’s some folks looking to build the initial product for startup ideas, and some are business people who want to learn more about coding [and be] able to better communicate with developers.â€

From as young as 11 to a gentleman possibly in his 80s, from Ph.D.’s to artists, students in Code Crew classes learn programs and skills such as Ruby on Rails, JavaScript, Bootstrap, iOS app development, and more. It’s a very diverse community, the O’Garros say, but Jamal adds that strong fluency in math-related knowledge is not a requirement.

“Learning how to program is really about communication … at the end of the day you’re communicating with the computer and telling it what to do,â€ he says. “Everyone knows basic logic and knows how to solve problems. If you can do those two things, you can program.â€ A computer programming course in college also wasn’t a requirement, as Jamal studied economics and Felicia focused on criminal justice.

Felicia also stresses one important aspect of Code Crew: “A lot of people mention to us that they’ve been to other programming-related meetups, but when they come to our meetups that they feel comfortable. We’re very beginner-friendly.â€

“People who are experienced developers aren’t friendly to ‘newbs’ (newcomers) asking questions, so we’ve seen that firsthand how uninviting some of these meetups can be,â€ Jamal adds. With Code Crew we try to make it as open as possible. The last thing we want to do is turn people away.â€

Not that that has been an issue for Code Crew. The O’Garros have already entertained interest for chapters in cities such as San Francisco and London, and got even more interest for collaborations after appearing at the White House in April for the White House Tech Meetup. The O’Garros are hoping to team up with My Brother’s Keeper and #YesWeCode, in addition to working on bringing Code Crew to Chicago’s South Side.

These initiatives–on top of participating in community events, partnering with organizations such as Girl Develop It and advocating for coding curriculum in schools–prove their plates are more than a little full. No wonder they’re working to take Code Crew to the next level.

“We’re looking to transition into doing (Code Crew) full time,â€ Jamal says, pointing out how the couple is saving money and finding other ways pursue their passion during business hours. “We really want to make a huge impact … slowly but surely, we’re working on making that happen.â€