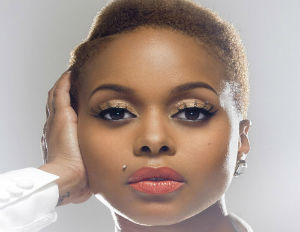 Chrisette Michele invites you behind the scenes, and into the studio, to partake in an all day creatively driven jam session, in a new video uploaded Monday May 4th to the songstress’ YouTube channel.

Watch as she and musicians riff and work through melodies, in effort to land the perfect sound for songs featured on her fifth upcoming album, “I’ll Set the World on Fire.â€

The video begins around 2:00 in the afternoon, with the 32-year-old former R&B Diva sharing her take on the recent rioting and protests that took place in Baltimore, Maryland, following the death of 25-year-old Freddie Gray. Gray died while in Baltimore police custody; Michele stated she is devastated by what she saw on the news, and allows it to influence her music.

“You’re never gonna catch me pointing a finger but what you will catch me doing is, finding Â where art meets this all, said Michele, ” [There’s] only but so much I can post on Instagram but I do believe in the power of music and of art and of the radio waves and I’m saying something that matters.Today we plan to create somewhat of a soundtrack to walk to– to march to.â€

Inspired by the state of current affairs, Michele vibes with producer and pianist Marvin Marcell, and guitarist Justin Lyons. Energetic and passionate as usual, the Grammy Award winning singer and songwriter provides her band with creative direction, encouragement and enthusiasm throughout the session well into the evening.

Fashion Sense to Cents: RHOA Marlo Hampton and ‘The Art of Style’