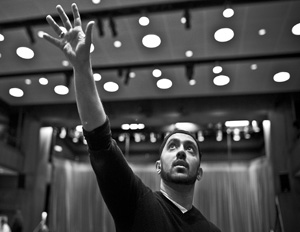 In a special series on Careers in Faith and Religion, we highlight professionals whose everyday work lives are centered on spirituality.

On the morning of Sept. 11, 2001, Khalid Latif was a sophomore at New York University. He looked on, along with his fellow classmates, as the second tower fell. Suddenly consumed by an array of confusion and intense emotions, Latif soon realized that the attacks on the United States that day would ultimately have significant influence on his perspective and approach to his career in ministry.

As the executive director and imam (chaplain) of the Islamic Center at New York University, Latif says he’s committed his life to reversing negative stereotypes and crossing religious lines in an effort to promote unity, peace and a greater understanding of the Muslim faith. Having been selected as the youngest chaplain ever for the New York City Police Department, Latif is giving a fresh new voice to multi-faith religious leadership.

Finding Diversity in Faith: Latif, 29,Â  was the youngest of three children who were raised in a Muslim home. But he wouldn’t begin to develop a deeper understanding of his faith until he was a freshman at New York University. When he arrived at NYU, he became fascinated to learn that such diversity existed in his faith. “It was the first time I interacted with a Muslim who was from a different culture than my own,â€ Latif says.

While a student at NYU, and after earning a bachelor’s degree in political science and Middle Eastern/Islamic studies, Latif says he realized that he had been called to the nontraditional field of ministry. Though his siblings had chosen more conventional careers in law and business, Latif felt an intense desire to follow a career path that would tap into the talents and things that he was passionate about. After attending law school for a year, though engaging, he realized it was not the path for him. “I wanted to do something that would benefit the people around me, rather than just me as an individual,” he says.

Filling a Spiritual — and Professional — Void: After realizing that there weren’t many professional models that dealt with Muslim student ministries on campuses, Latif began working to develop the Islamic center at NYU. While there are many Protestant and Jewish student ministries across the country, Latif saw a void among Islamic student populations. He decided to work alongside the diverse Muslim student body at NYU to establish the Islamic Center, a thriving Muslim ministry which now serves more than 2,000 students, faculty, and staff. The Islamic center provides a number of religious and social service programs to NYU’s Muslim community and the community abroad.

Branding Based in Service: Having committed his entire career to ministry, Latif takes experiences of religious profiling as motivation to work further in dispelling the myths about his faith. He’s passionate about informing others that ministry is, in fact, a career and that religion offers a great deal of opportunity for professional ambition.Â  “People don’t want to see how your religion benefits you, but they want to see how you as a practitioner of your faith bring a benefit to the society around you.â€

Though he has accomplished much during his career, having been a major young influencer and teacher on the topic of religion and politics, Latif remains humble and focused on what really matters. “At the end of the day, I don’t want to be a person that’s seen as separate from the community they serve,” he says. “Not ‘I am here and you are there,’ but this is where we are together.â€

Check us out tomorrow for the next feature in our Careers in Faith and Religion series.

Feature One: Travis Simons Finds Purpose in Advocating for Young Adults in Faith

Feature Four: A Woman’s Story of Balancing Ministry and Entrepreneurship