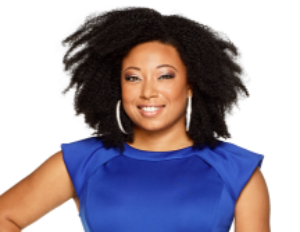 Bravo’s newest reality show “Blood, Sweat and Heelsâ€ had an explosive 2.5 million viewer debut, and seems to be the fans newest reality “fix.â€ The show follows six up-and-coming black women as they struggle to succeed in the concrete jungle of New York City.

Demetria, already becoming a fan favorite, is much more than your typical reality television star — she is about her business. Not only has she taken her blog A Belle in Brooklyn to national heights after writing a controversial blog which was the continued topic of conversation on the show, her brand(s) can also be seen integrated throughout the show on each episode.

Already apparent from the first few episodes, Demetria has set her sights on building her multi-platform brand, and advancing her career to her next level. Somewhat of an industry veteran, the former Essence relationship editor is also a critically acclaimed author, life coach and award-winning blogger.

BlackEnterprise.com caught up with Lucas as she discusses the challenges of exposing her life on reality television, her latest project “Don’t Waste Your Pretty,â€ and expanding her brand.

Black Enterprise: As somewhat of an industry veteran, what made you decide to do the show?

Demetria Lucas: I’ve been approached about doing some form of reality show before Bravo. What led me to it was the focus on professional women working in the city and on professional life. Over the years I have blogged and shared tons of life stories as well as about my business. My book [A Belle in Brooklyn: The Go-to Girl for Advice on Living Your Best Single Life] is very all in. I thought this was an opportunity to share life in video and for people to see it and not picture in their minds. It was also a chance to show my professional career.

Do you think being on a reality show, especially because of some of the negative criticism that reality shows now receive, will tarnish your brand in any way?

Doing a reality show is always a big risk, and I realized this especially on the day after the super trailer was released. I was and have always been very candid about my perception of reality TV. I didn’t see women like me in media. I’ve talked about images of women on reality TV for years. When I was approached, producers knew my critique of reality television, and I thought it was an opportunity to show a different side. However, I can’t speak for other castmates and can’t speak for what everyone does on the season.

After months of filming, was the show what you thought Â you were getting yourself into?

No. You don’t’ know what it is until you’re actually in it—the idea of cameras being trained on you all the time. What you’re doing is being aired to millions of people with millions of different opinions. I was very cautious. I found myself thinking a lot and having delayed reactions because you want to be yourself but also be conscious of how you’re acting on television.

How shocking was it for you to hear that other black women of color don’t believe that women should serve in leadership roles?

How to Build a New Startup in 5 Strategic Steps