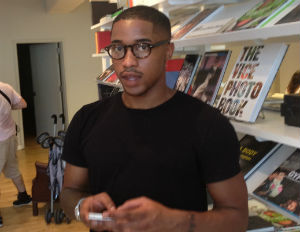 New Jersey native Jhamar Youngblood realized tennis is no fun to play by yourself and when he set out to find an opponent one day during college, he became annoyed at the steps necessary to track one down.

“I could go on Facebook or Twitter and post, ‘Who wants to play?’ but my friends don’t check their accounts all day, and they probably follow over 100 to 5,000 people,â€ the Dartmouth graduate student said. “So posts go missing–less than 10% of tweets or Facebook posts are seen by followers or friends–I couldn’t get in touch with my friends in real time.â€

He also thought about texting, but that presented a similar problem of having to copy-and-paste the message.

“I could text the same message 30 times. There had to be a more effective way to get in contact with all my friends in real time with one message,â€ he says.

It was here that Youngblood got the idea for Blastchat, an iPhone application he says will make “mass communication as easy as possible.â€

Blastchat allows users to send a message to a group of contacts. Through the app, messages are delivered to other users, but though they are notified of the message and respond to it through the Blastchat app, the conversation with the individuals from the group actually takes place in the iPhone’s iMessage app.

So far, the app has attracted about 1,000 users mostly from friends telling friends about it.

“The issue most social things have is that they aren’t useful if your friends aren’t on there with you,â€ Youngblood says, noting that there are plans in the works for ambassadors to visit colleges to promote the app. It is his hope that word-of-mouth marketing will encourage more people to sign up to use the app.

But another function of Blastchat coincides with that initiative and may see the results Youngblood wants. In addition to the mass messages users can send to friends, there is also an option to send public messages, specifically classifieds, to networks of people, such as students at various universities. Think of it is a “direct your inboxâ€ version of Craigslist, but with offerings from people in your school’s network, which could possibly speed up transactions such as selling a bike or getting someone to edit your thesis.

As Blastchat grows, Youngblood sees it being able to curate more of the content users want to see directly to them, such as bloggers notifying readers of new posts, promoters sharing details on an upcoming party and even celebrities delivering videos directly to their fans. In many ways, it eschews the model of posting on Twitter, Facebook and RSS feeds for the convenience of the text message environment.

“We know of a teacher in New Jersey who sends assignments using Blastchat,â€ Youngblood says of another use for the app.

“I want to destroy that stigma of tech being for nerds or just certain people–only a select few people can build things,â€ he says. “As kids, we had dreams of becoming athletes and entertainers. If that doesn’t happen, it’s like our lives don’t mean as much. I just want to be an example to kids in urban cities that there are many more opportunities out there in tech, engineering–there’s so many things you can become and you’re life isn’t limited to becoming a professional athlete or a rapper.â€

You can learn more about Blastchat by clicking here and download the app from the App Store.

How Job-Hopping Affects Your Career