Can You Be Too Sexy on the Job? 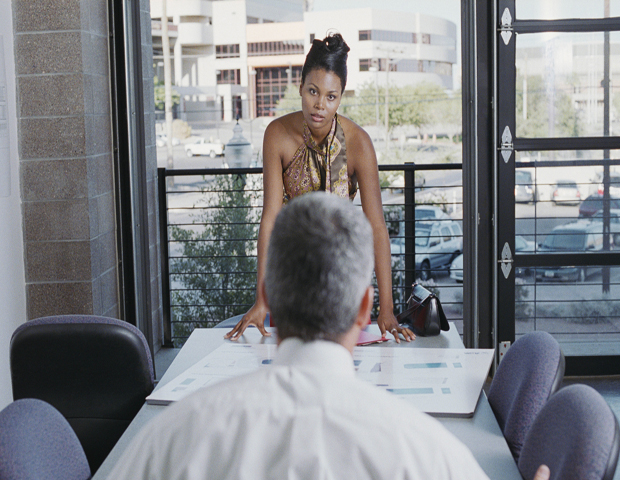 Can you be too sexy on the job? According to the Iowa Supreme Court, yes, you certainly can. As of Dec. 21, 2012, workers in the state of Iowa can be legally fired by their employer for being too alluring. The all-male high court ruled that a dentist in the state was within his rights to fire an assistant who he and his wife deemed too good-looking. In a 7- 0 decision, the court found it lawful for employers to fire employees whom they find to be “irresistibly attractive,â€ even if there are no performance-related grounds for termination.

While studies show that attractive men and women can earn more over the course of their working lives, being a conventionally pretty woman in the workplace can have its downsides, as fired dental assistant Melissa Nelson found out.

According to this academic study, attractive women who included photos with their resume were “less likely to be chosen for interviews than their not-as-attractive counterpartsâ€ even if they shared identical qualifications. While attaching a photo to a resume is unusual in the U.S., it’s now common practice for employers to Google their prospective candidates, making it easy to see what they look like in a matter of seconds.

Similary, a study reported in Psychology Today discovered similar results when it came to grad applications. Attractive applicants, men and women, were rated lower when viewed by someone of the same sex.

“I think it is completely wrong,â€ Nelson told ABC news about her termination. “I think it is sending a message that men can do whatever they want in the work force.â€

In your opinion, is this court ruling reasonable or simply ridiculous? #SoundOff and follow Jamie on Twitter @JayNHarrison.

The Boss’ Right Hand: How to Become Indispensable at Your Office

Fast Track to Success: How a 21-Year-Old Advanced to the Top at Five Guys