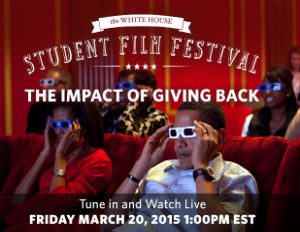 Today, March 20, the White House held its second annual White House Student Film Festival hosted by the president of the United States, Barack Obama. At the festival President Obama announced a new Call to Arts initiative through the Corporation for National and Community Service, the federal agency tasked with leading United We Serve, the president’s national service initiative, according to a statement released by the White House.

The festival showcased 15 students’ film interpretations of the theme “The Impact of Giving Back.â€ The 15 videos were selectedÂ in collaboration with the American Film Institute from more than 1,500 submissions from young filmmakers across the country.

The Obama administration is working with businesses to expand mentoring opportunities for young people. The Call to Arts is a three-year effort to expose young people to careers in the arts. The CNCS is joining with the American Film Institute and the Screen Actors Guild-American Federation of Television and Radio Artists to lead the initiative. These organizations share the goal of together dedicating more than 1 million mentorship hours over the next three years, according to the White House. The president announced that AFI and SAG will enlist mentors for each of the 15 students, who will benefit from the three years of mentoring.

Searching for an Internship? Check out 25 Highest Rated Companies for Interns

Does Your Family Want an Extra $120k in Retirement Income? If Yes, Read This