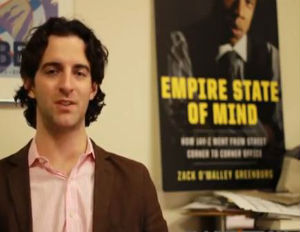 So, here’s the short of it: When we found out that the twenty-something Forbes writer Zack O’Malley Greenburg was writing a business-focused biography on Michael Jackson, we knew we wanted to talk to him.

He’d broken the news that Michael’s personal debts had been paid up and so we thought he’d be free to chat. He was. We met for lunch (Forbes’ offices are a short walk away from our office on Fifth Avenue in Manhattan). Here’s what transpired. Warning, the stuff we talked about concerning Michael (mostly under Zack’s personal embargo) is at the end. Dope insights all around, as you’ll see. We chatted mostly about his his business-centered biography on Jay-ZÂ titled,Â Empire State of Mind: How Jay-Z Went from Street Corner to Corner Office, newly out in paperback. Hova’s review? “Horrible.” You’ll see that story, later.

One more thing: Dec. 4 is Jay-Z’s birthday. As part of the celebrations, Empire State of Mind’s chapter on Chrysler’s failed “Jay-Z Jeep” will be excerpted on the great Rap Genius.

BlackEnterprise.com: You’ve mentioned repeatedly that you did some big-name interviews with sources that didn’t want to be included in the book once they found out that Jay-Z wasn’t going to be a part of the project. As a journalist, you certainly didn’t have any obligation to honor their wishes. Why did you?

Zack O’Malley Greenburg: That’s a good question. I don’t know. Maybe I shouldn’t have. If something’s not off the record, it’s on the record. You can’t really take something back. That’s the journalist code, anyway. I just felt as though that may be true, morally I felt a bit uncomfortable because in the beginning when I interviewed some of these people I had been pretty optimistic that Jay-Z would be on board. I didn’t want to have mislead them, and I didn’t want to burn bridges in the future with people who had been good sources.

The insights that I got, I was still able to weave into the book one way or the other, just not with a name attached to it. Although some of the names were big names and it would have been nice to say so-and-so was included in the book, would it have added that much more to the actual content? It’s debatable. But I think one of the great things about it being unauthorized in the end was that it forced me to really have to dig around and find some of these stories that ended up being the best chapters in the book.

You tell this story about how you ran into Jay-Z at Made in America — can you tell our readers what happened, and what do you think is so sensitive about the business aspect of his life that made him react the way he did?

I was doing work in the media tent doing interviews. It was the afternoon of the last day and I took a break and went to the porta-potties. The way it was situated, it was the same one on the border of the VIP area and the media area. So you couldn’t go from the media tent to the VIP area. But the porta potty bank served both tents. So I walk out of the porta potty and standing 15 feet away from me are Jay-Z, Beyonce and a whole gaggle of people. And there’s nobody between me and him. I had a few brushes with him, but there was always something — I was, like, well this is my chance. As I did, he turned around and our eyes met. He was walking past me and I say, “Jay, I’m the guy who wrote the book about you. And he kept walking for about ten feet — and I knew he’d heard me, because he was two feet away from me — and as he was about to turn the corner he looked over his shoulder and said, “That book was horrible!â€ [Laughs.] And then he walked off.

I was elated, because this kind of closed the loop. I didn’t really care what he was going to say, I was just curious to see what he was going to say. What the interaction told me was that obviously he’d read the book, but more importantly that it had gotten to him on some level, because that was not the typical Jay-Z reaction would be to ignore me.