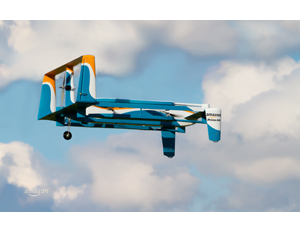 Amazon packages delivered by drone are on the way. In a series of videos, Amazon showed off Amazon Prime Air–a future delivery service that will deliver packages to customers using drones.

In a blog post, Amazon provides details about the delivery services. The drones–which are small, unmanned aircraft, will deliver packages to customers in 30 minutes or less. The drones can carry packages up to five pounds and fly at no higher than 400 feet.

The big question is one of safety. How will the drones know, for example, to not land on the family’s dog in the yard? According to Amazon, the drones are equipped with sophisticated “sense and avoidâ€ technology.

Also, how will the drones avoid colliding with other low-flying aircraft? In a whitepaper about its drone project Amazon states:

“It is Amazon’s position that the projected industry growth also requires the delegation of responsibility for many traditional air navigation services, such as navigation and air traffic control and communication.”

Amazon is calling for a “controlling entityâ€ that will provide central, offline coordination yet it will also manage its own fleet of drones by following set protocols, and by using vehicle-to-vehicle, vehicle-to-service, and service-to-service data communication and automation.

When will the service be available? Not until “we are able to demonstrate safe operations,â€ according to the blog post.
The image of the drone above and of those in the video, are not necessarily what the final models will look like. Amazon has a dozen prototypes built for testing, each varying in design and delivery mechanism. The company currently has Prime Air development centers in the Unites States, the United Kingdom, and Israel.

Google also announced its own drone-delivery program, Project Wing, which is set to launch in 2017. Apple has also entered into the drone business by making the Parrot BeBop Drone.

The drone industry is projected to be huge. Just this week, an FAA task force comprised of tech companies, including Google, Amazon and Walmart, put together a set of recommendations for drone operations.