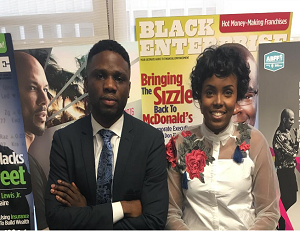 While college helps to build your network and contacts for current and future opportunities, the strength of the HBCU community is one that provides a unique connection for its students and graduates.

Just ask millennials Luke Lawal and Brittany Ireland, who are proud HBCU alums and the leaders behind the popular site,Â HBCU Buzz.

“I realized that after going to college no matter where you go you can pinpoint an HBCU graduate,” says HBCU Buzz founder, Lawal.

Graduating from Bowie State University in 2012 with a degree in bio-chemistry, Lawal works at a lobbyist firm on Capitol Hill and admits that it was the unique HBCU connection that helped him to grow connections at his current job.

“My general counsel is a Howard grad and we connected before I even got the job via LinkedIn,” says Lawal. “Whether I went to Bowie or he went to Howard, you generally just gravitate towards wanting to help and that’s one of the biggest benefits of graduating from an HBCU.”

His idea to launch HBCU Buzz came in 2009 during his undergraduate years, where he held a marketing position in the Student Government Association (SGA). With this position, the Maryland native traveled to different black colleges across the nation and got an inside view of how things were run on different campuses.

“When I was at Florida A&M I just remember visiting some of the SGA offices and talking to their students and I realized they have a lot of different techniques that us in the north just aren’t aware of,” he says. “So I was trying to figure out why we hadn’t connected with them and why we weren’t publicizing what other HBCUs were doing.”

It was then that his idea for a blog site came about. After spending much time at Howard University and eventually being contacted by BET to help with their Rip the Runway show, Lawal linked arms with Ireland, who was serving as Howard University’s homecoming fashion show coordinator.

“I asked him about HBCU Buzz and I was so excited and loved the idea,” says Ireland, who graduated from Howard in 2013 with a degree in public relations and a minor in sports management. “Immediately we were a team.”

The two locked arms and officially launched the site in March 2011, with Ireland working her way up from event coordinator, to director of PR and now president of the site.

Since it’s launch in 2011, HBCU Buzz has grown from a blog site that covers campus events, news, sports and fashion, to a brand that partners with the Thurgood Marshall College Fund, HBCUs for Obama, and political activists to host on-campus events across the nation.

With a growing readership that consists of more than 81,000 followers on Twitter, 55,000 on Instagram and 20,000 on Facebook, Lawal and Ireland make it clear that the secret to growing the HBCU Buzz brand is its strong connection to the community.

“They say ‘never make business personal,’ but for us it’s personal,” says Ireland.

As we celebrate HBCU Awareness Month, Black Enterprise and HBCU Buzz are proud to announce our newest partnership, which will include a greater synergy of content and events to better spotlight the concerns and accomplishments of the HBCU community.

Claim It! App Founder Got Idea for App While Living on the Streets

You’re Not Ready for College Without Social and Emotional Skills