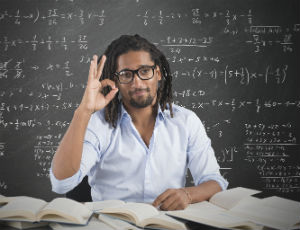 Entrepreneurs, engineers, and developers are emerging from Sub-Saharan African nations as though they are being churned out from assembly lines.

This is based on my anecdotal observations rather than any hard data, which I couldn’t find. But, why is it that so many Africans are absolutely slaying in STEM careers and degrees (science, technology, engineering, mathematics), while many African Americans seem to still lack the basic education, especially math skills, needed for science and engineering studies at the collegiate level?

I remember when I took my first course in biochemistry as a college freshman. The professor introduced a mathematical formula to calculate some biochemical process.Â He scribbled on the board so fast that several students (including myself) raised their hands and asked him to repeat the steps.

The professor huffed and said, “If you already understand the formula, you may leave class,â€ and half of the class walked out.Â The majority of those who left were foreign students. A good number of them, who I later became more acquainted over the course of the semester, were from African countries, predominately Nigeria.

The half that remained: usÂ mathematically-cowed Americans.

Surely, because we as African Americans hail mostly from Sub-Saharan ancestry, there can’t be much of a genetic difference between us and AfricansÂ in our math and science capabilities. So, what gives?

Robin referred me to an excellent piece in The New York Times, “Why Do Americans Stink at Math?â€ The article makes the argument that the cause of innumeracy–the math equivalent of illiteracy–is school.

As Robin stated, the way we are taught math is the problem. According to the NYT article, “By focusing only on procedures– ‘Draw a division house, put 242 on the inside and 16 on the outside,’ etc.–and not on what the procedures mean, ‘I, We, You’ turns school math into a sort of arbitrary process wholly divorced from the real world of numbers.â€

I suppose if you want to become a singer, actor, or an editor; a lack ofÂ math skills may make for some embarrassing moments, like not catching when you are given incorrect change at the register. However, math isn’t a prerequisite for those pursuits.

Yet rock-solid math and logic skills are imperative, for those who want to become engineers, developers, or the next Mark Zuckerberg.

Which is why, at Black Enterprise,Â we write a lot of content on STEM education. Technology and engineering degrees are near-guarantees for future career success and for empowering our community economically.

So, as the kids go back to school, make sure to stay on top of how they are taught math and the sciences. Attend school board meetings or rally, if you must. But, it is important for all of us of the African diaspora to demand that we are as well-educated in STEM as Africans.