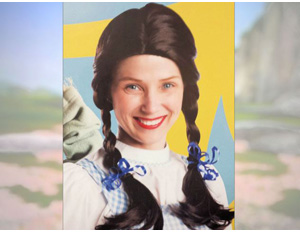 Re/code reports of an over-the-top corporate photo shoot arranged by Yahoo CEO Marissa Mayer last fall. Mayer had all of her top executives dress as characters from “The Wizard of Oz.â€ Mayer, of course, dressed up as Dorothy.

[Related: From Intern to CEO: Glenda Smith Talks What it Takes to Run a Successful Nonprofit]

The photo shoot was for a poster Mayer wanted to promote the company’s “Wizard of Ozâ€-themed holiday party.

The intention, purportedly, was to boost company morale. However, Re/code reports that the hefty price tag left a bad impression on some employees:

“It was very embarrassing, but Marissa thought that it was the way to make employees in Silicon Valley happy,â€ said one person there. “We really could not argue.â€

Business Insider reports that the party itself seemed to spare no expense and the musical entertainment was Janelle Monae, in-person.

Eyebrows are also being raised about what seems to be Mayer’s abandonment of a deal that was in the works to have Shonda Rhimes create an online show for Yahoo:

Another Mayer obsession for a while that went nowhere: Getting television’s hottest hit-maker, Shonda Rhimes, to make an original show for Yahoo, writes Re/code’s Kara Swisher.

Mayer has been subject to a lot of scrutiny since she was named CEO by Yahoo’s Board of Directors in 2012. She banned employees from working from home while she installed a nursery in her office, a move viewed by some as tone-deaf to employee’s needs.

Kara Swisher points out that Mayer’s leadership has “also been characterized by a lot of seemingly disjointed acquisitions that appear aimed more at bringing in talent to the company than any cogent direction. Mayer has no clear strategy head or chief product officer, save herself, which many think has been an issue.â€

How to Reprogram Your Brain to Save Money