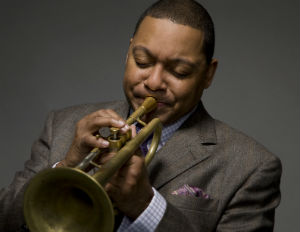 Yes, Wynton Marsalis has soul. The knee-jerk criticism of the 51-year-old jazz trumpeter ever since his self-titled 1981 album has been that, while always technically impeccable, his playing lacks soulful spirit.

“I’ve never heard anything Wynston played sound like it meant anything at all,â€ pianist Keith Jarrett once toldÂ The New York Times.

And so it’s somewhat ironic that this month should see the debut of bothÂ The Spiritual Side of Wynton Marsalis (a collection of spiritually inspired works) and Abyssian: A Gospel Celebration, a nationwide tour.

Marsalis–Pulitzer Prize-winning artistic director of Jazz at Lincoln Center–composed “Abyssinian Massâ€ to commemorate the 200th anniversary of Harlem’s storied Abyssinian Baptist Church back in 2008. Now, he and the Jazz at Lincoln Center Orchestra join the 70-piece Chorale le ChÃ¢teau and conductor Damien Sneed on a 16-city tour (October 3 – 27), performing a spirited admixture of gospel and jazz.