Big Blue & You Foundation: Careers In Science And Marine Biology 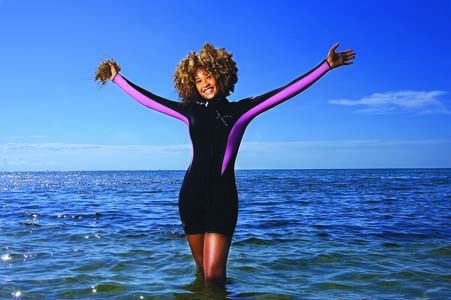 Name of program: The Big Blue & You Foundation Inc.

Program target: Boys and girls ages 6 to 18 from all races with a primary focus on communities of color

Program mission: To inspire and empower today’s youth to become stewards of Earth and guardians of the oceans through service learning, visual arts, and media.

How they receive funding: Contest and fellowship awards and small local grants from different agencies and organizations

Short-term goal: Create and build upon programs and events for children and their families focused on ocean conservation using art and media as the main platform of communication.

Long-term goal: Washington would like to develop, launch, and host a nationally syndicated television show for children about marine life.

Ever since she was in pig tails, marine biologist Daniell “Danniâ€ Washington has been in love with the ocean–an interest supported and nurtured early on by her mother, Michelle Swaby-Smith, who remembers her 6-year-old declaring during a killer whale show at SeaWorld that she wanted to be a whale trainer when she grew up. Just a few years later, Washington won a competition to name a baby dolphin at the Miami Seaquarium and spent two days swimming with the friendly mammals. “It was wonderful,â€ recalls Washington’s mother. “This of course really fueled her fire to continue pursuing her passion.â€

Washington attended the University of Miami, where she had lengthy internships with the National Oceanic and Atmospheric Administration (NOAA) at its Southeast Fisheries Science Center, and spent a year with the Pew Institute for Ocean Conservation Science, both in Virginia Key, Florida. She graduated in 2008 and just a few weeks later entered Roxy Surfwear’s Follow Your Heart Tour contest during which she expressed interest in creating a television show for kids about ocean conservation. Washington won and used the $10,000 prize money to create The Big Blue & You Foundation (www.thebigblueandyou.com) in September 2008.