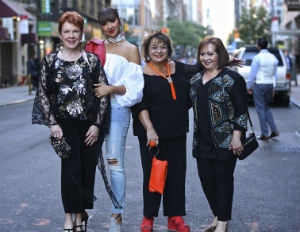 Last week, the Women’s Prison Association (WPA), founded in 1845, hosted a premiere event for the Season 4 release of the highly anticipated Netflix series, Orange is the New Black (OITNB).

The WPA is a service and advocacy organization committed to helping women with criminal justice histories realize new possibilities for themselves and their families. Their services make it possible for women to obtain work, housing, and healthcare, to rebuild their families and to live law-abiding lives in the community.

The WPA collaborates with OITNB in hopes of bringing awareness and enlightening general audiences on the impact of prison and the work they’re doing to ensure that former women prisoners will have the rights and opportunities they deserve upon release.

“What we expose the WPA is actually trying to solve,â€ says Laura Gomez, who plays ‘Blanca Flores’ on the series. “Their vision and their mission is important and I think all of us in the show are very much aware of the role that they play and how important it is. We’re bringing the conversation to the table. When you are able to bring attention to those topics you can no longer ignore them. You really have to face them and do something about it.â€

“WPA helps women with criminal justice histories find safe housing and stable jobs, access health and mental health services, and be stronger moms. It is my pleasure to bring awareness to this important work — especially through such a fun event with the support of my cast mates,â€ says Cruz in expressing her excitement to perform for the worthy cause.

All proceeds from the event benefit the WPA.

To learn more about the WPA and the impactful work they’re doing to give a voice to the 200,000 women currently incarcerated in the U.S., be sure to visit www.WPAonline.org.

This “Champion of Change” Wants You To Make Something