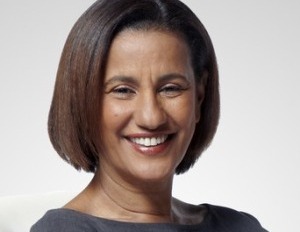 Most people are surprised to learn that one of the most respected and celebrated bridal designers in the world is a Black woman. But Amsale Aberra, the Ethopian-born fashion designer who will be honored with a Legacy Award at the 2012 Black Enterprise Women of Power Summit and who has had her creations worn by school teachers to socialites to stars like Halle Berry, is full of surprises.

Like most entrepreneurial endeavors, the Amsale brand was born out of an identified void in the marketplace; and the gumption to fill that void. “I started [my label] right after my wedding in 1985. I was looking for a very simple gown for myself and thought ‘I can’t be the only person searching for this.’ and so I started a small custom business,” says the University of Massachusetts graduate, who supported herself in college through a number of odd-jobs. After graduating, Amsale left Boston for the Big Apple to hone her design skills at the Fashion Institute of Technology. Upon graduation, she landed a job at Harve Bernard. “I was his assistant. We did suits and career type dresses,” she recalls.

When asked what her big break was as a bridal designer Amsale reveals, “When you’re first starting out, every little thing is a big break.” She adds with a chuckle, “When I received that first call [for a purchase] I thought, someone actually wants a dress from me.” Soon, the New York Times came knocking at her door. “They did a profile on me as a new designer in the style section. It really got the attention of editors who later requested wedding dresses,” she explains.

Fast forward to 2011 and that initial small, custom based business has expanded to an empire including the classic collection Amsale, Kenneth Pool for the edgy, over the top bride, Christos, a feminine and soft collection of gowns and bridesmaid dresses of which Amsale boasts, “I don’t do bridesmaid dresses that say bridesmaid. They’re sophisticated.” She also has a red carpet collection consisting of couture eveningwear. In addition, last season Amsale added reality television to her already packed resume with the debut of her WeTV show, Amsale Girls, that allows viewers to observe what goes on behind the scenes of her swanky Madison Avenue showroom. And the talented designer is far from finished admitting that she’s interested in bridal accessories like jewelry and shoes and even a home line. “When we have the right partner, we can do different things. It just has to be the right time,” she says.

For other Black women who aspire to break into the bridal industry as a designer, Amsale offers this advice: “If you’re committed and have a very clear idea, eventually you will succeed,” she shares. But she adds this important caveat, “Have a point of view. There are a lot of designers out there. Doing the same thing as everyone else; it is hard to succeed that way. Be unique about your idea and stick with it,” warns Amsale.

The groundbreaking-yet-humble designer shies away from labels like innovator. “I never really considered myself an innovator. More than being an innovator, I’m someone who is passionate about consistently making a product I believe in,” Amsale admits. She adds, “My line evolved from me being the patternmaker, cutting the fabric and making every dress one at a time. Clearly that is a huge change to where I am today. But what has remained the same is my attention to the entire process. I always think about the bride, the woman wearing the dress.”

Join Amsale and hundreds of powerful women for the annual Black Enterprise Women of Power Summit hosted by State Farm, Feb. 15—18, 2012, at The Ritz-Carlton, Orlando, FL. This exciting, executive leadership summit is your chance to focus on YOU. Network with industry leaders, learn career strategies, find work-life balance, and start creating–and living–the life you really want! Register now and use code DGED12 to receive a $200 discount off the price of registration! (Cannot be combined with other offers).

8 Days to Action: DAY 6, Finding Inspiration from Your Predecessors