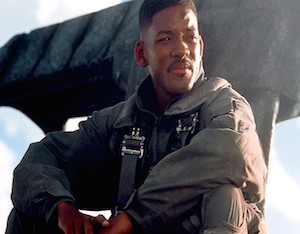 Twenty years is a long time for a project to be held on the shelf, but when you’re a sci-fi action blockbuster like Independence Day, people are eager to wait for its return.

According to Deadline, the head honchos at Twentieth Century Fox have given the green-light to begin filming the Independence Day sequel. Set to roll cameras next May, the studio is negotiating a deal to lock down original director Roland Emmerich to helm the second movie. While Emmerich’s former producing partner Dean Devlin is also returning, the Hollywood scoop site claims that Will Smith, who played Captain Steve Hillier, won’t return for the new film due to being “too much to hire.”

“Will Smith cannot come back because he’s too expensive,” Emmerich said in a recent interview. Casting has not yet got off the ground, but it is Deadline’s guess that it will start once Emmerich signs on the dotted line. “We have, like, maybe half of the people that you would know from the first film [in the script] and the other half who are new. I think some aliens will be back,” Emmerich said. Rumors are already swirling that Jeff Goldbum (scientist David Levinson) and Bill Pullman (President Thomas Whitmore) would return, but that information has yet to be confirmed.

For those too young to remember, Independence Day starred Smith and Goldbum’s characters entrusted with the task of saving Earth’s population from an alien invasion.

The sequel is already scheduled for a June 26, 2016 release date, which is just in time for the Independence Day weekend.

World AIDS Day: ‘Growing Up Positive’ Talks Race and Living with the Disease

After 4 Years of Being Missing, Young Boy is Finally Found in Georgia