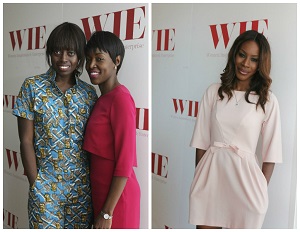 On Friday, Sept. 19, hundreds of NYC power women gathered for the 2014 WIE Symposium at the Dolce Vita Showroom for a day of empowerment and inspiration that connected established trailblazers with emerging leaders in media.

Hosting a series of panels throughout the day, WIE made sure that its audience of female business leaders left the room with loads of gems and newfound wisdom to help them become better competitors in the workforce.

“Women need to jump out there and be more assertive,” advised entrepreneur Cindy Gallop, who joked to the crowd that the best way to go about making more aggressive business decisions is to think WWASWGD (What would a straight white guy go)?

Brad Burnham, managing partner at Union Square Ventures, further touched on the difference between men and women in business saying that “many women under sale themselves and many men over sale themselves,” encouraging women to step up to the plate and take a more leadership approach to their careers.

Later in the day, Tanzanian trailblazer, Nina Marapachi, spoke on how she took her career from intern to the head of a billion dollar hedge fund and the importance of gaining mentors both in your industry and outside of your industry.

“You have to be patient, proactive and very bold,” Marapachi says in response to an audience question about how to get a mentor, while adding that you should be very clear on what you need out of people.

The creative mind behind the highly talked about film Belle, Amma Asante, also took the stage to share her insights on how she bounced back from the downfall’s of her first film, A Way of Life, which only made $10,500 in revenue.

“It’s about getting up. Success comes from failure,” said the film director.

Asante, who’s next project will be in partnership with Warner Bros Pictures, received the WIE Network Creative Vision Award, and was applauded for bringing a story like Belle to life.

Filled with dynamic speakers, free lunch and awesome power women to network with, the 2014 WIE Symposium shaped up to be just the empowerment session that every boss women and leading entrepreneur needs.

For further information about WIE and to stay up-to-date on next year’s symposium be sure to check out their website at WIENetwork.org.

NAAAHR’s National Conference to be Held in Philadelphia