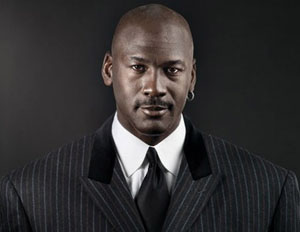 In commemoration of Michael Jordan’s 50th birthday Yahoo Sports takes a look at the highlights of his career — his drafting from North Carolina in 1984, his six titles with the Bulls and his longstanding association with Nike.

The Michael Jordan brand remains robust, growingÂ  25 to 30 percent in 2012 and generating more than $1.75 billion a year internationally, with a net worth of $650 million.

MJ now controls 58% of the basketball shoe market.. His original five-year deal with Nike was worth half a million a year, plus royalties, and his current deal about $60 million.

And last year he took in $80 million from corporate sponsorships with not only Nike,Â  but also Gatorade, Hanes, Upper Deck, 2K Sports, Presbyterian Healthcare and Five Star Fragrances. MJÂ owns six restaurants, a North Carolina car dealership, a motorsports team and 80-percent of the Charlotte Bobcats.