Half of a yellow sun banned, Censor board refuses to let film play in nigeria 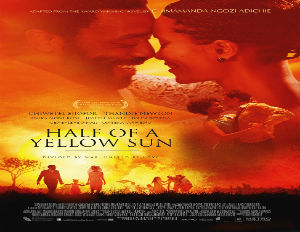 “Half of a Yellow Sun”, the sweeping, epic love story about a central cast of characters whose lives and loves are shattered by the Nigerian Civil War is now playing in New York and select cities across the U.S.

The film is based on an award winning novel by international bestselling author Chimamanda Ngozi Adichie.

It stars Chiwetel Ejiofor as the lead male character. Thandie Newton and Anika Noni Rose, play sisters betrayed by love and country. Nigerian stars Onyeka Onwenu and Genevieve Nnaji are featured in strong, supporting roles. It also stars John Boyega, who will star in the next Star Wars movie, and OC Ukeje, another young Nigerian actor with his star on the rise.

The film had its world premier at the Toronto International Film Festival last year and has been showing in Britain and other European countries all to great critical acclaim.

But in Nigeria, where expectations had been high and demands for its release had reached a fever pitch, the film has inexplicably been”banned”.

It had been widely assumed that the film, masterfully directed by Nigerian-British Writer-Producer Biyi Bandele, would be nationally embraced in its home country, most notably for the way it unites Nigeria’s major stars and cultural figures and for finally putting Nigerian talent in the international spotlight.

And it took six long, exhausting years spent trying to get it made.

According to Bandele, “It was just difficult raising 10 million dollars, which by Hollywood standards is a catering budget, but in Nigeria that is the biggest budget for a movie that has been made so far.â€

But Nigeria’s Film and Video Censorship Board isn’t impressed.

They delayed or flat-out refused to give the film a ratings certification – which the law requires it obtains in order to be shown in cinemas – just before it was scheduled to begin playing in cinemas on April 25th.

So why is this internationally acclaimed love story getting no love from the censorship board in its home country?

A press release on behalf of Patricia Bala, Director-General of the Nigerian censorship board and posted by the National Film and Censors Board is categorically denying reports that the film is banned, suggesting instead that it may have been delayed.

The press release says “The management of the Board under Ms. Patricia Bala states that certain aspects of the film have some unresolved issues which have to be sorted out in accordance with the law and laid down regulations”.

It is unclear exactly what those “unresolved issues” are.

Biyi Bandele, the Movie’s Director tells Black Enterprise, “They’ve banned it without actually using the word banned. Nigeria can be a very strange place. It reminds me of a scene from the movie the Sweet Smell of Success, where Burt Lancaster tells Falco who is played by Tony Curtis, Â ‘My right hand has not seen my left hand in 30 years.’ And so you’re talking to one part of the government and you think everything’s is fine and then the other part of the government is looking to sabotage you.â€

One theory being posited about the censorship board’s hesitation to give the film a ratings certificate is concern that the movie which features scenes from the Nigerian Civil War might provoke tribal or ethnic violence, especially in a country “besieged with terrorist bombings and profoundly shaken by the abduction of over 200 schoolgirls by Boko Haram”.

Nigeria’s Civil War, also called the Biafran War, was a brutal, bloody affair. The death toll is estimated at anywhere between one and three million. Raging between 1967-70, It ripped the country apart as Igbo’s from the east, battled federal forces mostly from the North. Hundreds of thousands of Igbos died from starvation after Nigerian forces imposed a blockade, while waging a ruthless, scorched-earth that destroyed nearly everything in their path. Memories from the war are an open wound for some still carrying bitter resentment and lingering fury over the massacres on both sides.

Bandele is less convinced. He says he has seen the movie with Nigerians all over the world, in India, Dubai, Toronto, Dublin, Scotland and several Scandinavian nations. He says he’s never met a single Nigerian who walked out of the screening looking to harm anyone.

He tells BE, “Everywhere I’ve gone, my film has spoken to people. I’m really looking forward to watching it with an African American audience and I hope it speaks to them too.â€

Black Enterprise also caught up with Anika Noni Rose at the New York African Film Festival as she attended a screening of the Film at New York’s Lincoln Center. She spent considerable time in Nigeria while the movie was being filmed.

Though “Half of a Yellow Sun”, cannot be seen in a Nigerian theater at the moment, it is scheduled to begin streaming on PANA Television, an Internet television service that legally streams African inspired video content, at the end of June.

Mandy Roger, Head of Global Content for PANA Television is optimistic the film will become available to moviegoers.

She tells Black Enterprise, “I think the Nigerian Censors board has banned the film amid fears that referencing the Biafran War will incite violence in the country again which could negatively affect the country’s upcoming elections. I do believe however that the film will eventually be made available in Nigeria once people realize that this is a beautifully made, historically relevant film that emphasizes the need to look back in order to move forward. We at PanaTV are very proud to make the film exclusively available on PanaTV starting June 29th. This demonstrates our commitment to continue supporting great films from Africa”.

Jere Rae-Mansfield, CFO and Managing partner of Monterey Media Inc., which secured the distribution rights for the film in the United States also weighed in on the situation.

Her company only distributes Independent Feature films. She says among other reasons, they selected this movie because of Africa’s prominence in the press and she believes the film has so much importance because of what is going on in Nigeria today.

She tells Black Enterprise, ” I think it’s very sad for the people not to be able to see this film because it’s a love story and a story that talks about the heart of the African people. I believe it’s a censorship issue not a banning issue. I’m not in their minds so I don’t understand it, but there’s a lot of things going on there I don’t understand. But it’s an important story, whether now or later. I don’t understand why the censor bureau is withholding it, but I don’t have any doubt that it will be released”.

OC Ukeje also talked to BE about being a part of the cast of Half of a Yellow Sun, about the movie being kept in limbo in Nigeria and what it means to him to have been a part of it.

“It’s an important film for me as a Nigerian. I really don’t know what the issue is about the censorship board banning it. It’s an adaptation of a book that has been selling for years in the country and has been recognized around the world. It’s really also a love story, so I don’t understand what their gripe is with the film. I wish the censorship board will do more in ratings and gradings of films as opposed to censoring because we have a lot of films that they don’t even have the time to censor, and it goes straight to DVD and nobody clamps down on those. It takes your mind back to conversations that people have not had especially for those of us who were born after the war and it helps to touch on history.â€

Bandele agrees. He says the film will still be seen by millions of Nigerian’s regardless of the ban. Whether they’ll see it on illegal downloads or in theaters is up to the censorship board.

He tells CNN, “If the biggest film that’s ever been made in Nigeria is available to Nigerians only in bootleg form, the censorship board will be doing to the Nigerian film industry what Boko Haram is trying to do to Nigeria: drive a stake through its heart. I sincerely hopeÂ  they both fail”.