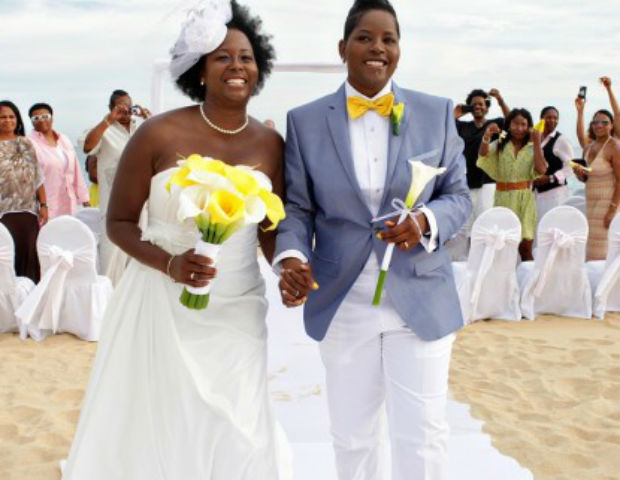 It was a day many couples dream of for Mignon R. Moore, 42, and Elaine Harley, 43, who exchanged wedding vows at a beachside ceremony in Los Cabos, Mexico, in 2012. The native New Yorkers marked their 10-year relationship by obtaining a marriage license from the state. Unfortunately, they are not receiving all the benefits of a legal marriage because they have been living in Los Angeles for the past six years, where they are recognized not as spouses but as domestic partners.

“We only had a small window of time to get married in California before Prop 8 [the ballot initiative that stripped same-sex marriage], so we never got the opportunity,â€ says Moore, an associate professor at the University of California, Los Angeles.

“There are roughly 1,100 benefits, rights, and protections conferred on married couples on the federal level. And hundreds more benefits, rights, and protections that married couples receive under state law,â€ says Taylor. Among these is the right to joint parenting, joint adoption, status as next-of-kin for hospital visits and medical decisions, and inheritance of jointly owned real estate.

The marital benefits couples such as Moore and Harley receive from a state that recognizes their union doesn’t extend across state lines. Moreover, the 1996 federal Defense of Marriage Act, or DOMA, which defines a marriage as a union between one man and one woman, restricts the federal government from recognizing any state-issued marriage licenses for same-sex couples. The financial consequences of this can be grave. The U.S. Supreme Court is currently reviewing a case challenging DOMA filed by Edith Windsor, 83, who paid more than $363,000 in federal estate taxes on her inheritance after her wife, who she had been with for 40 years, died in 2009. Had their 2007 Canadian marriage been recognized federally, no estate tax would have been owed.

Historically, states have decided who can marry within their borders, says Michael Crawford, director of online programs at Freedom to Marry, which is leading the campaign to overturn DOMA nationwide and is working to win civil marriage in battleground states including Rhode Island, Delaware, Hawaii, Minnesota, Iowa, and New Jersey.

“Civil Marriage–much like divorce–is not governed under any religious jurisdiction, contrary to much of the public debate over marriage equality. To date, eight states have civil unions or domestic partnerships. Another nine states and the District of Columbia permit same-sex couples to enter into a civil marriage, and 29 states have banned same-sex marriage. If DOMA is struck down, the federal government would be required to treat same-sex couples legally married in their state the same as any married spouses,” says Crawford.