Why Are White Voters Siding With Mitt Romney? - Black Enterprise 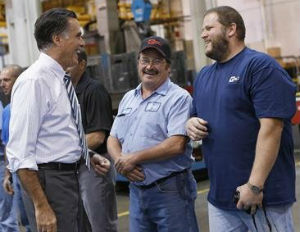 A recent Washington Post report found that 91 percent of Romney’s supporters are white. Slate’s Tom Scocca, who is voting for President Obama, wonders what other white people are seeing that he isn’t.

What is it with these white men? What are they seeing that ordinary people don’t see? What accounts for this … secession of theirs, from the rest of America? John Sununu, Romney’s campaign co-chair, responded to Colin Powell’s endorsement of Obama by saying, “I think that when you have somebody of your own race that you’re proud of being president of the United States–I applaud Colin for standing with him.”

Sununu was trying to be snide. But there he is, standing with Mitt Romney. Just like Donald Trump and Clint Eastwood and Buzz Bissinger and Meat Loaf–one aging white man after another. It’s a study in identity politics.

White people don’t like to believe that they practice identity politics. The defining part of being white in America is the assumption that, as a white person, you are a regular, individual human being. Other demographic groups set themselves apart, to pursue their distinctive identities and interests and agendas. Whiteness, to white people, is the American default.

You can read Scocca’s entire essay at Slate.

Skip Gates: The World’s First Black President Was In Mexico