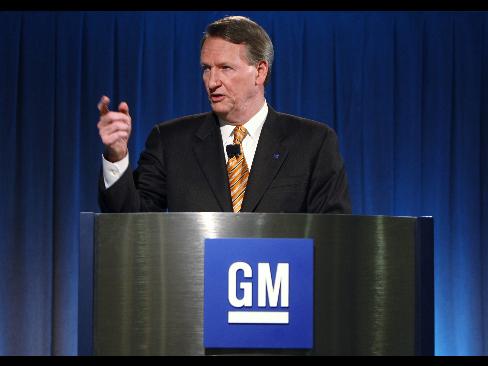 In an effort to right the flailing auto industry, President Barack Obama forced out General Motors CEO Rick Wagoner and said neither GM or Chrysler would receive anymore federal bailouts until the companies won more concessions from unions and creditors.

GM was ordered to present a restructuring plan, but it just wasn’t good enough. “Based on extensive analysis and the advice of a range of financial and industry advisors, the administration has determined that GM has not presented a viable plan that would succeed, even in an improved economic environment,” the White House wrote in a fact sheet.

Though Obama is being tough, he is clear that “we cannot, and must not, and we will not let our auto industry simply vanish.”

To assuage the concerns of people considering buying a GM or Chrysler vehicle, the government said that it would immediately begin backing the warranties for new car buyers — a move that reassures consumers that it is still safe to buy U.S.-made vehicles.

A new warranty program, “will cover all warranties on new vehicles purchased from participating auto manufacturers during the period in which those manufacturers are restructuring. Both General Motors and Chrysler have agreed to participate in the program. Specifically, the program will:

– In the event of a failure of a participating auto manufacturer, appoint a program administrator who, together with the U.S. government, will identify an auto service provider to supply warranty services.”

Of course, Obama can’t let either company go under, but as a taxpayer it bothers me that these companies were so inefficient for so long. I fear that Detroit will be hit by even more layoffs.

GM and Chrysler owners and shareholders: are you reassured by the Obama administration’s strategy? Does the plan give you confidence that you won’t get stuck with a problem vehicle? Will you buy American or seek a car or truck from a foreign automaker? Will this plan get the automakers back on track?


Deborah Creighton Skinner is the editorial director at BlackEnterprise.com.

The Power of Persistence