What One Executive is Doing to Help #BringBackOurGirls 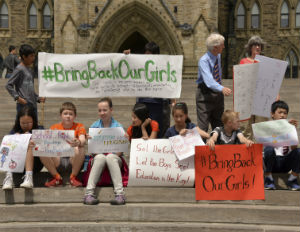 April 14 marks the two-year anniversary of the Boko Haram kidnapping of more than 200 school girls in Nigeria.

With the hashtag #BringBackOurGirls making the issue a global social movement, more attention has been brought to the Nigerian government and its efforts to put a stop to the Islamist extremist group whose name means “Western education is forbidden.”

Shortly after the Boko Haram attacks in the Nigerian village of Chibok in 2014, Omolola Adele-Oso started the Washington, D.C.-based nonprofit Act4Accountability to build a culture of community and accountability among Africans and the diaspora through civic engagement.

Serving on the forefront of advocacy efforts here in the U.S. on behalf of the #BringBackOurGirls movement, Adele-Oso opens up to BlackEnterprise.com about the state of Nigeria today and the work she’s doing to increase cooperation and support of bringing our girls home safely.

Act4Accountability is beyond an organization. It is an idea that if we can build a culture of community among the African diaspora we can transform the current state of the continent and its people. That means we do a lot of work around civic engagement and educating people around some of the challenges and speaking the truths to hold ourselves accountable.

What is the organization doing to continue the conversation around the issues taking place in Nigeria?

We decided it’s not enough to be angry and frustrated, and that we should transform that anger into coordination with partners in Nigeria, here, and with members of Congress. We do workshops and speak at colleges because, unfortunately, some people don’t realize that 219 girls are still missing, and that since the incident more abduction of girls and women has happened. So, we talk about the issues and build partnerships with organizations that are on the continent so that we get an unfiltered idea of what the realities are. We also work with governments to learn about the challenges they face when it comes to the rescue mission and the Boko Haram insurgency.

Being in D.C., we also have access to so many players who are invested in Africa and we’re a voice to say this is the reality. If you’re doing business in Africa with a government that isn’t able to protect its people then you’re in the wrong for not demanding that something is done. So, we make a connection in showing people that we all have a place in the Africa rising story and we want to tell our story, which makes us the “FUBU for advocacy.”

To learn more about Act4Accountability and how you can be involved in bringing awareness to the missing girls and social issues in Nigeria, visit act4accountability.com.