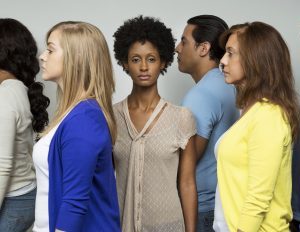 It seems as if all racism hell broke loose with the election of Donald Trump as POTUS.

The mayor of West Virginia just lost her position for a racist Facebook exchange insulting Michelle Obama by referring to her as “an ape in heels.â€

Incidents of racial, gender, and just about any other type harassment have been on the uptick since the election: A trans woman in Tennessee had her truck lit on fire and spray-painted with the words “Trumpâ€;Â swastikas are popping up in Jewish neighborhoods; and “whites onlyâ€ was painted on the walls of a Minnesota high school.

The digital world was also rife with racism and hate this past week. Here are a few of the worst offenses:

Fake Trump Quotes About Africans Have Blown Up On Facebook Thanks To Hoax Sites–from The Huffington Post.

In the news this week were reports of fake news sites promoting bigotry and outright lies being passed around on social media. A quote attributed to Donald Trump made the rounds on social media this week:

In my opinion, most of these African countries ought to be recolonized again for another 100 years because they know nothing about leadership and self-governance…

The quote was from a verified fake news satire website.

Students of color claimed that white students carried Donald Trump signs while yelling, “white power,â€ at the York County School of Technology in York, Pennsylvania. One student said that there was “fighting in the cafeteria and white students yelling that they were going to ‘deport Mexicans back to Mexico and blacks back to Africa.'”

The stunning election of Trump is said to reflect economic anxiety among the white working-class in rural areas negatively impacted by global trade and high-tech replacing traditional manufacturing jobs. However, a report from the Michigan Chronicle states it’s African Americans who have the most to lose due to technology and innovation.

Trump’s Presidency Will Be a Disaster for Innovation and STEM:

Science and technology do not seem to be a big priority on Trump’s radar. In fact, he’s likely to take the country backward in those regards.

One of his first 100-days-in-office pledges is to “cancel billions in payments to U.N. climate change programs.â€ He’s a climate change denier and has taken a stance against net neutrality. But for African Americans, another very real threat is Trump’s promise to “cancel every unconstitutional executive action, memorandum, and order issued by President Obama.â€ Which places many of the STEM and technology programs put in place by the Obama administration under threat.