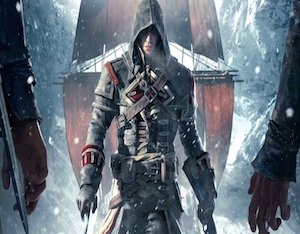 Video games fans will be treated to a wealth of new content courtesy of Ubisoft today. A brand new trailer for the upcoming Assassin’s Creed: Rogue has hit the web and it promises a change of pace as you’ll get to step into the shoes of the series’ main baddies.

The journey finds players lacing up as a former Assassin-turned-Templar named Shay Patrick Cormac who becomes a turncoat after discovering that the Assassin order had him end innocent lives. Betrayed by the Brotherhood he had served for so long, Shay scours the ends of the Earth–from the frozen North Atlantic to rural New York–where he aims to complete his mission of hunting down members of the Assassin order under a new flag of the Templar.

Assassin’s Creed: Rogue is set in the middle of the 18th century during the Seven Years’ War, which will give gamers and history buffs reason to rejoice. Players will also traverse the Appalachian River Valley as new locations across North America will be available for exploration. The game, which also will come out alongside Assassin’s Creed: Unity, will be available on November 11 for the PlayStation 3 and Xbox 360.

As of now, there are no confirmed plans to bring the game to current-gen platforms (PlayStation 4, Xbox One) or to the PC. You can see the new gameplay trailer for yourself below:

Harlem’s Fashion Row Works to Educate Next Generation of Creatives