[Watch] A Conversation With Millennials About Student Loan Debt Solutions 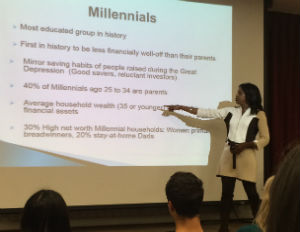 This week, I had the pleasure of talking to students at Rider University as part of American Studies Speaker Program.

The students were polite and attentive as I shared with them what I’ve learned about millennials in my research on social and financial issues, as well as real life experience interacting with them, and my observations that they are a highly misunderstood group.

We discussed how they were one of the first generations, (my Gen X was actually first), to be less financially well off than their parents, and how that was a game changer in a way that other groups don’t seem to quite understand.

We discussed how coming of age during the Great Recession made them fearful investors and big savers. I could see a quiet resignation in their faces as we discussed their possibilities for raising families and homeownership given their economic legacy and the fact that they are more drawn to philanthropic than capitalistic pursuits.

As the conversation became more intimate, we began discussing student loans. I could feel the weight of the room get heavy as one after another poured out stories about struggles with student debt, a burden they felt was a life sentence. I heard person after person say how things like marriage and children were not even in their fields of consideration because of their student loans.

I was surprised that most of them were completely unaware of things like the government’s Public Service Loan Forgiveness program, which forgives all of your student loan debt after 10 years of working at a government office or nonprofit–the years do not have to be consecutive.

Many were also surprised to hear that the government will also pay $60,000 of your student loan tab under the Federal Student Loan Repayment program as long as you agree to work for Uncle Sam for at least three years.

According to the Office of Personnel Management, in calendar year 2013, federal agencies provided 7,314 employees with a total of more than $52.9 million in student loan repayment benefits. Fourteen federal departments and 17 agencies used the tool. The four agencies making the most extensive use of student loan repayments were the Departments of Defense, Justice, State, and the Securities and Exchange Commission.

More and more employers are also entering into an employee incentive contract or agreement, offering to pay student loans as a bonus or perk. In turn, you agree to be a loyal employee and remain with the company for a given period of time.

With student loan debt topping $1 trillion it is imperative that we educate students–young and old–about alternative solutions to their debt burden. As I saw in the student’s eyes that night, many have given up on the American Dream they were told was within their reach if they worked hard and got a good education.