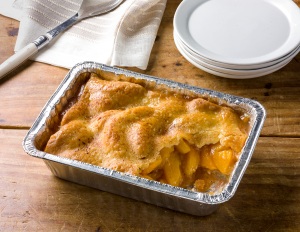 It was just a year ago that Walmart scored a major hit, with its line of Patti LaBelle desserts, when #PattiPie became a viral sensation.

AllÂ three cobblers areÂ priced at $6.98 and are sold fresh–not frozen–in Walmart’s bakery section. They’re pre-baked, so they can be served as is. But, they come with the recommendation to heat at home for 12-16 minutes, for a bubbling fillingÂ and crispy crust on the top and bottom.Â The sweet potato loaf is $4.48, and the apple pecan cake is the most expensive new item from the line, at $9.98.

The cobblers are baked by Houston’s Twin Star Bakery, which already supplies Walmart with a number of specialty dessert cakes. The addition of the cobblers will add more than a hundred jobs, according to a blog postÂ from Walmart. The sweet potato pound cake is a joint venture with Philadelphia’s Brown Betty Dessert Boutique, runÂ by three generations of black women. It will be available only in select stores in the northeast.

These newcomers join the original three desserts of the line: the star sweet potato pie, plus a caramel cake, and a vanilla pound cake.

Early reviews of the new Patti LaBelle desserts have been mixed. SomeÂ reviewers haveÂ praised the real fruit, but many are saying, overall, they’re just too sweet. We’ll have to wait and see if James Wright Chanel thinks they’re something to sing about, honey.