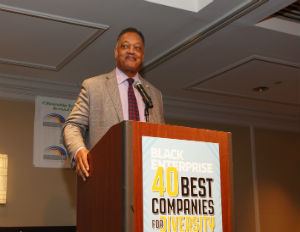 We are free but not equal

It made perfect sense for BLACK ENTERPRISE to team up with Rainbow Push, one of America’s most prominent civil rights groups, for this year’s Wall Street Project Economic Summit. Our two organizations share a common objective: To ensure that African Americans gain access to a level economic playing field.

Rainbow Push President and Founder Rev. Jesse L. Jackson repeatedly asserted during the summit that African Americans are now at the next stage of the emancipation battle as part of a “four-movement Freedom Symphonyâ€ that included the abolition of slavery, end of Jim Crow laws and ability to exercise our franchise through voting rights. The fight today, he says, is “the democratization of our economy…We don’t have a talent deficit. We have an opportunity deficit.â€

Under the theme “Where Wall Street, Main Street and Silicon Valley converge,â€ the conference — appropriately held days before celebrations honoring slain civil rights leader Martin Luther King, Jr. — was a magnet attracting business luminaries, political leaders and BE 100s CEOs. It’s where attendees heard World Bank President Jim Yong Kim discuss the institution’s mandate to end crony capitalism and set a goal to end worldwide poverty by 2030. It’s the venue where Intel CEO Brian Krzanich shared plans to allocate $300 million to help diversify Silicon Valley. And it was the platform for members of BLACK ENTERPRISE’s Registry of Corporate Directors – our list of African American on board members of S&P 250 companies — to share why inclusion in corporate governance ranks is so vital.

Those who attended panels and presentations at the Sheraton New York this past weekÂ  quickly discovered just how much yardage African Americans need to gain. For instance, when we unveiled our BLACK ENTERPRISE 40 Best Companies for Diversity in recognition of those entities embracing across-the-board participation of African Americans, not a single Silicon Valley tech company made the roster.

The session, “Money Where It Matters: Managing Corporate, Endowment & Foundation Funds,â€ however, was the most telling of American industry’s continued culture of exclusion.Â  The Wall Street Project Asset Management Study was unveiled, revealing the challenges faced by minority firms to gain a foothold in a sector in which assets under management totaled a whopping $68.7 trillion and profits grew to $93 billion in 2013. During her presentation, Sabrina Philson, principal of Epsilon Advisors LLC and author of the report, shared the following findings:

Using our BE ASSET MANAGERS List, the study further revealed that the top 15 black firms manage a total of $118.4 billion in assets — a mere 0.3% of the total $36 trillion in domestic institutional assets under management. Â For instance, 77 of the 100 largest publicly-traded companies do not contract BE 100s firms to manage their assets. And five of these corporations were on BLACK ENTERPRISE‘s list of 74 companies without black corporate directors: Berkshire Hathaway, ConocoPhillips, Hewlett Packard, Oracle and Intel.

Of the 23 companies that used BE 100s money managers, five had the “broadest board diversityâ€: Bank of America, PG&E, PepsiCo, Walt Disney and Exelon, a company in which Chief Investment Officer Douglas J, Brown told Summit attendees that an African American investment firm was its top performer. Â Except for Disney, these corporations can be found on our most recent Best Companies for Diversity list.

Among the barriers to entry, Philson says, is “the perception that these firms were novices in the field despite the fact that their founders and employees are transplants from bulge-bracket firms and received their training and honed their skills while employed at mainstream investment companies.â€ Moreover, these BE 100s firms demonstrated consistently superior performance and, in many cases, outperformed industry leviathans.

John Rogers, Jr.,Â  CEO of Ariel Investments (No. 3 on the BE ASSET MANAGERS List with $9 billion in assets under management) says corporate purchasing departments exclude African Americans from such high-margin activity because too many don’t view black suppliers as professional services providers. He further maintained that these corporations and universities believe black firms are capable of offering “construction, catering and janitorial services…basically the same jobs we had during slavery — building, cleaning and making meals.â€

Jackson added that most CEOs offer lip service to true inclusion. He says: “Companies that buy banquet tables [at black events] don’t do business with us.â€

So how do we reverse this trend?

Rogers, Jackson and others argue that our advancement boils down to one word: Courage.

During the session, moderator Ralph Moore of supplier consulting firm RGMA and panelist Orim Graves, executive director of the National Association of Securities Professionals, encouraged audience members to go back to their employers and advocate for inclusion of African American-managed mutual funds to be among 40l (k) and 403(b) offerings.

Corporations should contract services of black-owned asset managers, among other suppliers, not because it is good citizenry but due to the fact that it makes good business sense. Companies should always make room for top performers that will add value.

The continued presence of old boys’ networks, however, require that African Americans unite, maneuver and use our power and influence — whether it comes from our seat in the boardroom or post in a grassroots organization — to negotiate a stronger financial and business position as well as obliterate obstacles to our progression.

We must heed the message threaded throughout the Economic Summit to marshal resources and continually agitate for our fair share.

To reach the economic goalpost, we must take that first step.Â  The only requirement is courage.

Book Review: The Man From Essence by Edward Lewis with Audrey Edwards

Is Paid Leave a Worker’s Right or Privilege?