Ever since President-elect Barack Obama won the Iowa caucus, North Carolina resident Faye Scotten had a feeling he would win the big prize.

Then, following his Super Tuesday sweep, she was certain. Today at the “We Are One” inaugural celebration at the Lincoln Memorial, smiling from ear to ear, she said, “I feel like the dream has come true and I am proud to be an American citizen. God has his hand on Obama. This is like the second Moses coming to deliver us from this mess.â€

This is not the first time that Scotten has been a witness to history. As a freshman at North Carolina’s A&T State University, she traveled to Washington, DC, to hear the Rev. Martin Luther King Jr., speak. And when she was eight years old, she traveled to Washington with her grandmother and stood in snow that came up to her waist to attend President Harry Truman’s inauguration. She doesn’t remember much about that experience besides the snow but it made her want to replicate something like it with her own granddaughter, Maya, age 10, who traveled from North Carolina with her to participate in Obama’s inaugural festivities and be there when the nation’s first black president is sworn in. “I want her to have the same experience and hopefully remember it as an important day.â€

They were at the memorial with Maya’s cousin Mark, 7, and both children said they wanted to see in person what a president looks like.

Despite their excitement and the pride they feel about Obama, neither child aspires to be just like him when they grow up. Maya hopes to be a teacher. Mark says he doesn’t think he has the political skills. “I have other plans for my life,â€ he added. “I’m going to be a doctor.â€ 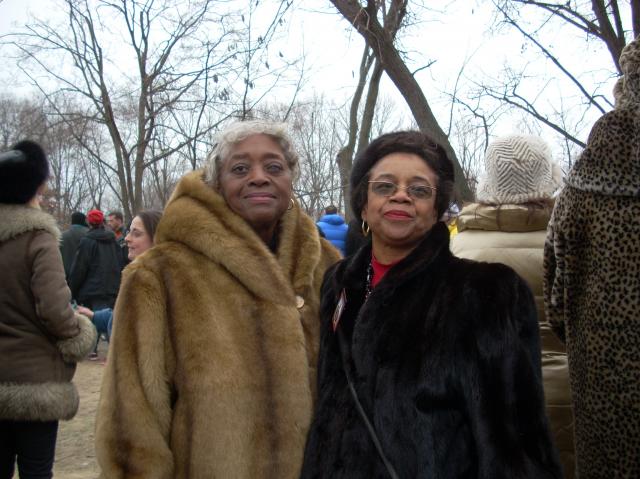 As soon as Obama won the presidential election, Harriet Johnson and Doreen Leary, who hail from Mount Vernon, New York, invited themselves to Johnson’s daughter’s home to celebrate the nation’s new chief. “I know great things are going to happen with Obama. This is just the beginning,â€ said Leary.

The two women were wrapped elegantly in fur as they stood on the outskirts of the Lincoln Memorial, making new friends.

They began the day at a church service attended by the civil rights icon Rep. John Lewis of Georgia, who recalled his days in the movement and said that Obama’s presidency is a down payment on “the dream.â€ Leary knew exactly what he meant. When she was a teenager during the tumultuous 1960s she worked with her mother to register voters and help people sign up for Medicare and Medicaid.

Leary’s also done her fair share of knocking on doors to get out the vote activities. But this week she’s celebrating and tonight Leary and Johnson, who met years ago when they were nursing students, are back

CBCF and the People’s Inauguration Project