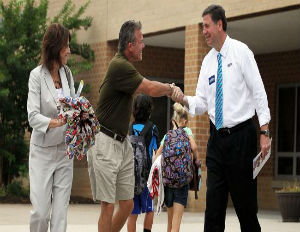 Virginia Republican George Allen’s last Senatorial campaign came under fire for his attack of an East Indian with the use of a racial slur — “macaca.â€ Now, according to the Grio, his embrace of a controversial state song may hurt his campaign.

While serving as a state legislator in the early 1990s, Allen wanted to keep “Carry Me Back To Old Virginiaâ€ as the state’s song, despite its use of terms like “darkieâ€ and “massa.â€Â There had long been efforts to repeal the song and Allen, after all the pressure he took about it, removed the songÂ during his last year as governor in 1997.

“This song was written years ago and it was not written to offend anyone,â€ Allen said in a videoÂ released by The Huffington Post. “The issue that is before us is that the original words are now understandably offensive to some people. Though they were not intended to be.â€

College vs. Career: Get the Dream Job Without the Degree