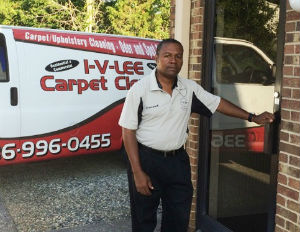 Let it be known that real success does not happen overnight. The common thread that runs between having a dream and the manifestation of that dream is called ‘hard work.’

Yes, we live in a world today where many want microwaved success, but few are willing to go through the process of patience, persistence, personal and professional training and development to build a solid business that is profitable and sustainable.

[Related: Mompreneur of Six Shares 3 Steps For Starting a Business]

Vincent Lee, founder and CEO of I-V-LEE Carpet Cleaning based near Winston-Salem, North Carolina, is a prime example of one who didn’t take any shortcuts on the road to success. Throughout his 18-year journey, he has combined the skill of working hard with the art of working smart to achieve his goals.

Lee remembers how his very first dabble with entrepreneurship began around age 10, when he would pick up and deliver Sunday newspapers for apartment residents in Brooklyn, New York. His wages would be a meager twenty-five cents or whatever leftover change that was given. After his family moved from New York to North Carolina, Lee continued to develop his work ethic that he adopted from both of his parents. He labored in agriculture from the blazing fields of Pender County, the same county where I was born and reared. He recalls distinctly when his dad approached him about a $200 used motorcycle that he really wanted. “I didn’t want to ask anybody for nothing,â€ says Lee. He told his dad to give him two weeks, and he took it upon himself by cutting grass, washing cars, running errands, and doing whatever that was necessary to get that bike.

By age 18, Lee knew in his heart that he wanted a business of his own one day, a thriving, profitable business. Several years later, he attempted to clean the carpet in his apartment, but instead called a professional.

Within a six-month period, he called the same cleaning company and noticed that the prices increased for the same service and the same amount of time. That’s when a lightbulb came on. Vincent started to see the vast opportunities to make money in the carpet cleaning business. He researched the industry, bought a portable cleaning machine, and then made an astonishing discovery–he didn’t have a clue of what he was doing.

Soon, he realized that in order to stay in the game, he had to learn, learn, and learn some more. He went back and took classes, got professional training, and then was ready to take off; or so he thought.

Through years of trial and error and risky moves, he pressed through the rough and rocky times. Speaking of bold risks, Lee vividly recalls going to pick up his wife’s (Angie) Honda from the shop after she paid for a $700 air conditioning repair. Hours later, Lee ends up bringing home a small cargo van from a trade-in at a local Ford dealership. Ouch. After all, he was in the carpet cleaning business now. He made his wife a swift promise to replace her vehicle and purchased her a SUV with all cash. Smart man indeed.

Lee, who is celebrating his 50th birthday, was 32 years old when he formally launched I-V-LEE Carpet Cleaning. He concurrently worked a full-time job with a Fortune 50 company while working on his part-time dream until he replaced the salary of his full-time job. “I thank God for my health and strength to get up every day and go to work.â€ I-V-Lee Carpet Cleaning is thriving today by providing high-quality services throughout the entire Triad area.

BlackEnterprise.com:Â What are the five qualities that one must have to achieve success in business?

What are some things that you wish you’d known earlier?

Where do you see your business in 5 years?

To be one of the best and sought-after floor care companies in the Triad area. A company that will be fully and professionally staffed, and create jobs that offer its employees competitive salaries, benefits, and bonuses.

How would you encourage or give advice to anyone who is just starting out with a business?

What is your favorite business quote?

Roz A. Gee (@RozAGee) consults as The MediaMatch Mavenâ„¢ of The Rated Gee Agency with service sectors in media relations, brand readiness, and speaking and training. Roz has masterfully mixed over 20 years of cumulative experience and has worked professionally for industry titans such as General Electric, AT&T, AOL, IBM, and Northrop Grumman. Schedule a complimentary analysis at www.MediaMatchMaven.com. You can also find her on Twitter (@RozAGee) and Facebook.