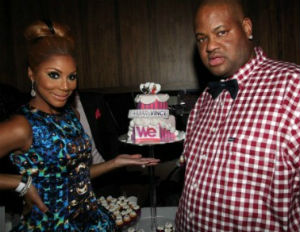 Tamar Braxton and Vince Herbert have been at the top of media’s gossip chain since the first episode of WEtv’s Braxton Family Values aired April 12, 2011. With Tamar’s Igotplentyofmouth.com attitude and Vince’s laidback, go-with-the-flow persona, audiences were captivated by the couple’s ability to get through the good and the bad–at home and in business.

Now, three seasons later, the most popular Braxton on TV and her music executive husband have proven why they are the topic of everyone’s conversation. After swearing they would never have children, the Hollywood couple is expecting their first born–who according to Tamar will be their only born–and as Vince says, “It was all God; had nothing to do with us.â€

While expecting her first child–the sex of the baby is still not officially confirmed–the 36-year-old songstress and reality star is now on her way to the top of her career as she recently released her first major single, “Love and War,â€ in December.

With a baby on the way, a budding singing career on the fast track and a top-notch husband who is responsible for some of the biggest names in music, BlackEnterprise.com sat down with the couple in Manhattan to find out just how crazy life in the Herbert house is these days with so much going on. Tamar had one thing to say, and Vince another.

So from babies to business, here’s part two with one half of TV’s hottest couple, Vince Herbert spilling it all.

BE: When did you decide you wanted to have a kid?

BE: Did you guys ever have the talk, If we get pregnant, this is what we’re gonna do?
Vince: We never had the talk [room breaks out into laughter]. We knew that wasn’t something in our cards. We never planned on it.

Vince: We never had the talk [room breaks out into laughter]. We knew that wasn’t something in our cards. We never planned on it.

BE: When you first found out you were pregnant did you think you wanted a boy or a girl?
Vince: It really didn’t matter to me. I just wanted to have a healthy baby. I couldn’t believe it, and I still can’t believe it. As long as whatever it is comes out healthy and happy, I’m good.

Vince: It really didn’t matter to me. I just wanted to have a healthy baby. I couldn’t believe it, and I still can’t believe it. As long as whatever it is comes out healthy and happy, I’m good.

BE: Now that you know you two are having baby No. 1, do you want more because you know Tamar comes from such a big family?

Vince: Nope! I don’t want no more kids. I got the baby and I got Tamar, I’m good.

BE: How do you think a baby will change her career, and yours, now that your single is all over the charts?

Vince: The baby will just be working with us. Now the baby got a job: [its] job is to sit over there and don’t cry! But nah, I don’t think it will affect us at all.

BE: Are you glad she waited so long to release this single? There was certainly come tension on Braxton Family Values when it came to her releasing her music.

Vince: All I can say, like I say all the time, is have a standing applause for me. How about a standing ovation–

Tamar: Why is that?

Vince: [Claps] Cause you listened–

Tamar: I didn’t have a choice. You wasn’t gonna budge.

Vince: I’m very glad she waited because timing is everything. It was the best thing for her career to make sure we had the right record; it was the right time; it was the right time in people’s lives to receive her as a real artist. I think that’s a thing we were blessed with that so many other artists don’t have. People actually got a chance to go on a journey with her, and see the passion she had for what she wanted to do. Then to come out doing it so well and the fans receiving it…it was just so great. So I’m very glad we waited.

BE: Were you nervous right before the single was about to come out?

Vince: I was never nervous. I knew Tamar could sing. I just knew we had to find the right song and the right time. It’s funny, when the record came out we was actually laying down in the bed. I was getting ready to do something–go to the bathroom or something–and Tamar was like, “Oh babe, the record is out!â€ And we just went on with our night. We didn’t flinch because I think when you have faith and you let God do what he’s gonna do and you do your part there’s nothing to be afraid of.

BE: How stressful was the process of putting the single together once you guys got things going?

Vince: It wasn’t no stress at all. Tamar is an absolutely incredible artist to work with in the studio because she does it so effortlessly. It’s just like–it flows out of her throat, and like she said, we were just riding around and listening to it ourselves and it was like, Okay, now it’s time to push the button. We’re at the finale of the show. People seeing that build up, and the fans just as excited as she is because she just wanted it out. She wasn’t worried about what number it was gonna be; she just wanted it to come out, and finally feel like I’m living my dream.

BE: How often does the mix of business and marriage affect your life at home?
Vince: It doesn’t affect our marriage at home. I just feel like, you know, it’s not work. We’re just together, we’re having fun, we’re doing things that we love, so it’s not a job. Sometimes Tamar may push the envelope a little bit–

Vince: Tamar will ask you the same question 10 times, 10 different ways, but as far as affecting us, nah, it’s not that serious. It’s a blessing to do what we’re doing.

BE: When it comes to business, what is the most annoying thing about Tamar?

Vince: She don’t wanna listen. It’s like she said, those answers don’t come when you want them because you want them to be the right answer, and for artists a lot of times, and for it being your wife, you want it to be even more right. You don’t want it to just be like, Well, they don’t wanna put the record out, or, They didn’t like the record. I’m not telling my wife that. You have to tell them things when they’re necessary. You have to remember an artist has morale, and at the same time you want to protect that. You wanna keep that in the right, positive way. So certain things you need to answer the right way, and if you don’t have the information there’s nothing to answer. And I be just telling her, “Tamar, Annie Mae, just wait!â€

Why More Women Should Be Introduced To Tech Careers