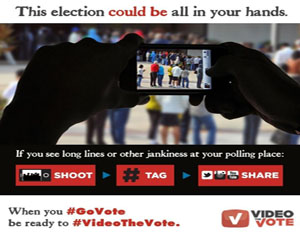 Americans across the country, including those suffering from gas shortages, power outages and crumpled homes from Hurricane Sandy, are determined to get to the polls. New York City residents can now vote at any polling place in the city and if you haven’t already voted early or submitted an absentee ballot, today is the day to cast your vote.Â  Swing states like Ohio, Wisconsin and Pennsylvania are especially under watch this election, and, if you notice anything suspicious at the polls, Video the Vote is encouraging you to use your phone to spread the word.

The site along with UStream have joined forces to draw attention to disenfranchisement like the “hanging chads” debacle in 2000 and subpar voting machines in urban areas (as seen during presidential elections in Florida in 2000 and Ohio in 2004). “Unfortunately, when elections are this close, we usually see different suppression strategies at play,â€ said Matt Pascarella, Video the Vote project director, who has been covering voter suppression as an investigative journalist for more than 10 years for various media outlets.

These tactics include denying voters in long lines and new voter ID laws, among others. Russell Simmons has already created the digital film “Battle for Your Ballot,” which identifies injustices from this election season.

Check out UStream’s live stream of potential spots of controversy and their app that locates your friends in battleground states to remind them to vote. Upload a video or photo with the hashtag #VideoTheVote to document your experience or expose an issue you come across at the polls.Â  The editors will verify and distribute stories to larger media outlets like CNN and MSNBC.

Using Hip-Hop to Make a Difference: A Talk With Tamekia Flowers-Holland

Life After the Yard: Professionals Talk Career Benefits of Pledging